Get the app Get the app
AOPA will be closed July 4th, in observance of the Independence Day holiday. We will reopen at 8:30 am ET on Tuesday, July 5.
News & Media Thrush makes first flight with new GE turboprop 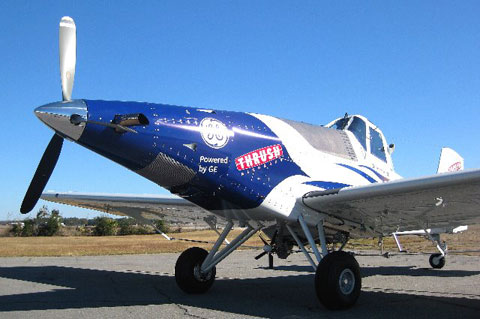 The Thrush Aircraft 510G is the first new airplane to fly behind General Electric’s new light turbine engine, the GE H80 turboprop. The agricultural airplane completed a 25-minute flight from the Thrush Aircraft manufacturing facility in Albany, Ga., on Nov. 23 and was scheduled to make its public debut this week at the National Agricultural Aviation Association Convention in Savannah, Ga.

The H80 engine is based on Walter Engines’ M601 turboprop. Since its introduction in 1975, more than 1,600 M601s have accrued 17 million flight hours on 30 applications. After acquiring certain assets of the Czech-based aircraft engine design and manufacturing company during the summer of 2009, GE improved the M601’s aerodynamic design and incorporated advanced materials to create a more powerful, fuel-efficient, and durable engine. The H80 has no recurrent fuel nozzle inspections or hot section inspection, GE said, adding that it will feature an extended service life of 3,600 flight hours or 6,600 cycles between overhauls.

The H80 will produce up to 800 shaft horsepower (shp) and is intended for use in business, utility, agricultural, and other general aviation aircraft. Its specifications are very similar to those of the Pratt & Whitney PT6A, which powers earlier iterations of the Thrush 510 ag airplane. The first H80 began its certification testing on March 8 in a test cell at the GE Aviation Czech facility in Prague.

“It’s shaping up to be a terrific airplane,” said Jody Bays, chief pilot for Thrush, who flew the initial flight. “We met all of our first-flight objectives, and the aircraft and engine both performed exceptionally well.”

The flight also marked the beginning of the field test phase of the new airplane’s development program, with FAA certification anticipated during the second quarter of 2011. The H80 engine will accumulate more than 8,000 cycles and 150 endurance hours during engine durability and performance tests. Engine certification tests continue at the GE Aviation Czech facility, with EASA and FAA certification expected in early 2011.

“We’re looking forward to getting the next phase of flight test under way, and to demonstrating the enhanced capabilities of this new airplane with GE power,” said Payne Hughes, Thrush Aircraft president.

The Thrush 510G will have a hopper capacity of 510 gallons and a gross weight of 10,500 pounds. Its wing spar is rated for more than 25,000 hours of service; its tubular steel fuselage and cockpit roll cage, removable fuselage skins, and chromate-treated aluminum surfaces for corrosion prevention are designed to maximize pilot safety, reduce maintenance, and enhance aircraft productivity. The new H80 engine is expected to provide enhanced hot and high performance, higher cruise speeds, and increased fuel efficiency.