Get the app Get the app
AOPA Members DO more LEARN more SAVE more - Get MORE out of being a pilot - CLICK HERE
News & Media One airplane, two pilots, 65 days of nonstop flight 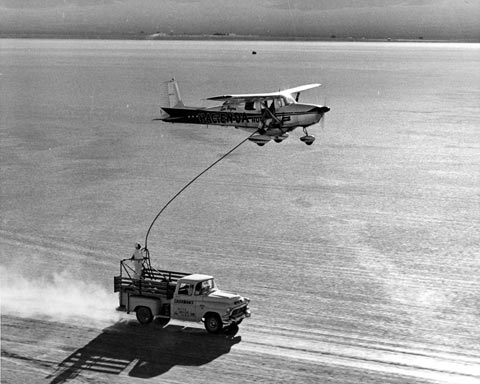 The previous record holders refueled via a hose from a truck and crew that drove at a matched speed on the ground. (Photo courtesy Howard W. Cannon Aviation Museum)

How would you like to try to break an international record for endurance flying by piling into an airplane with another pilot and staying aloft—for 65 days? No? That’s OK. Matt Pipkin is going to do it for you.

Pipkin, of Boise, Idaho, along with his father, Chet, hope to make a run at the existing world record, set in 1959. That flight was made to raise money for cancer research. The pilots flew 64 days and 22 hours nonstop.

Pipkin is hoping the record attempt will attract attention to the topic of childhood sexual abuse. He wants to use the flight as a platform to share his story and open a dialogue about the problem—and get victims to seek help.

“One in three girls and one in six boys are sexually abused prior to the age of 18,” he said. “Nine out of 10 keep their experiences secret because they believe that it was their fault.” Pipkin, now 26, was one of those who kept silent for years. He was abused at age 5 but didn’t seek counseling until a few years ago. It was a life-changing move that helped him to realize that he wasn’t to blame.

But it also left him wanting to do something more—something to de-stigmatize the problem and encourage others to seek help. He founded the nonprofit Commit365 to launch an ongoing national awareness campaign. The endurance record attempt, dubbed Commit65, grew out of that. He wasn’t a pilot at the time, although he had taken some flight lessons in high school. “I started [training] five days after this idea came about,” in June 2009, he said.

While the subject is stone serious and Pipkin treats it as such, his personality flavors the Commit65 project in a blog and videos. He takes a lighter approach, peppering presentations with hand-drawn stick figures and joking that the prospect of flying for two solid months in an airplane sounds miserable and that he “suckered” his dad into it.

Chet (left) and Matt Pipkin want to attempt to break the world endurance flying record by staying aloft for 65 days of nonstop flying.

In fact, Chet Pipkin volunteered to join the project after Matt’s brother-in-law had to bow out because of work and family commitments. Chet is a Boeing 737 captain for American Airlines.

The project requires FAA approval for both the airplane and the flight.

“Whatever [aircraft] we use, whether certified or experimental, it will have to go into the experimental category to make the mods we have to make,” Pipkin said. The plan for the flight will seek a waiver from the minimum safe altitude requirements of FAR 91.119 (c). “They waive that for airshows all the time,” he said.

Pipkin submitted a plan for the flight to the FAA this week. He’s been making the rounds of radio stations and other venues to drum up support for an online fundraising campaign that ends Dec. 20. And he’s been looking for an airplane that can be modified to complete the record attempt.

The pilots who set the 1958 record flew a Cessna 172 with the name of the sponsor (the Hacienda Hotel and Casino, located on the Las Vegas strip) emblazoned on it. Its stripped interior had only a left pilot seat and left controls. A 95-pound Sorenson belly tank was installed that would allow 12 to 15 hours of time between refueling. Oil was added and oil filters were changed via two lines plumbed through the firewall.

They refueled by suspending a hose to a truck and crew that drove at a match speed on the ground; in a similar fashion, they drew up baskets of food and supplies via a tow hook. They flew and slept in four-hour shifts. How did they, um, take care of other necessities? The records don’t say, and Pipkin isn’t divulging anything on the subject either.

If all goes as planned—funds can be secured, plans approved, and an airplane acquired and modified—the flight will take place in September 2011. Commit65 seeks corporate and individual sponsors for several items; a “wish list” is on Pipkin’s blog.