Get the app Get the app
Already a member? Please login below for an enhanced experience. Not a member? Join today
News & Media SpaceX recovers Dragon capsule from orbit 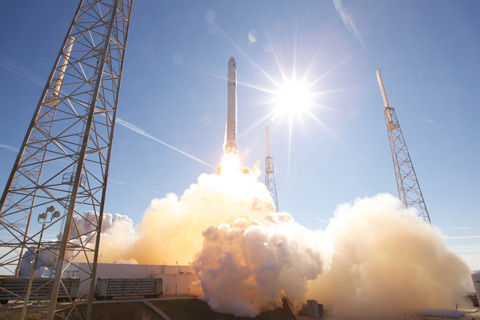 The company launched the Dragon capsule atop a Falcon 9 rocket from Cape Canaveral Air Force Station at 10:43 a.m. The unmanned capsule orbited the Earth at speeds greater than 17,000 miles per hour, re-entered the atmosphere, and parachuted back to earth, landing in the Pacific Ocean shortly after 2 p.m., SpaceX announced.

“Just the launch is difficult enough, but successful launch, orbit, and intact reentry have been accomplished by only a few nations to date,” said NASA Administrator Charles F. Bolden Jr. “The SpaceX mission today is the first time an entrepreneurial enterprise has joined this very elite company of space-faring entities.” Successful re-entry from low-Earth orbit had previously only been accomplished by the United States, Russia, China, Japan, India, and the European Space Agency.

The test flight was conducted under a NASA contract set up to encourage private industry to ship cargo to the International Space Station.