Get the app Get the app
Already a member? Please login below for an enhanced experience. Not a member? Join today
News & Media Harrison Ford receives aviation's highest award 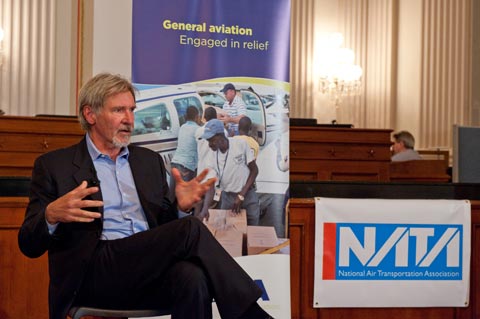 Aviation bestowed its highest award, the Wright Brothers Memorial Trophy, on pilot, actor, humanitarian, and AOPA member Harrison Ford on Dec. 17, exactly 107 years after the Ohio brothers changed history on the sand dunes of North Carolina when their Wright Flyer took off on the world's first ever powered, controlled flight.

The trophy is awarded annually to a "living American for significant public service of enduring value to aviation in the United States."

"Well, I fit the criteria on two parts. I'm living and I'm an American," Ford quipped to an audience of 900 at the black tie dinner in Washington, D.C., home of the Aero Club of Washington, which hosts the dinner, and headquarters to the National Aeronautic Association. The NAA established the award in 1948 to honor Orville and Wilbur Wright.

According to the NAA, "while Harrison Ford is primarily known for his on-screen achievements, the aviation community has been the beneficiary of his life as an aviator, mentor, teacher, humanitarian, and an inspirer. Ford has parlayed his passion for aviation and his concern for its future, along with his humanitarian and educational efforts, into a motivational leadership role that has unquestionably advanced and invested in America’s aviation’s future. An avid pilot and active member of the aviation community, his unswerving passion for aviation, combined with his global respect and visibility, have provided both the opportunity and platform from which he has been able to make a significant impact on something very important to him – aviation’s future."

In introducing Ford, industry leaders, including FAA Administrator Randy Babbitt, AOPA President Craig Fuller, Cessna Aircraft President and Chairman Jack Pelton, and EAA Chairman Tom Poberezny, heaped accolades on the accomplished pilot and actor. Babbitt noted Ford's consistent message and reputation for flying professionally and training regularly. Fuller praised Ford's role as national spokesman for the GA Serves America campaign, which aims to improve the perception of GA. Ford is a frequent advocate for GA, including making an appearance before a gathering of members of the General Aviation Caucus in the U.S. House and Senate.

Pelton thanked Ford for being such a loyal Cessna customer and noted how Ford had used his airplanes for the good of others, including taking more than 300 young people for first flights while he was chairman of the EAA Young Eagles program. In addition, Ford volunteered to be honorary chairman of the Cessna Citation Special Olympics Airlift, which every four years brings together thousands of Citation business jets to transport athletes to the Special Olympics. In addition to encouraging owners to volunteer their Citations for the air lift, Ford left a movie shoot last summer to use his Citation Sovereign to transport athletes to the event in Lincoln, Neb.

Poberezny commented on Ford's advocacy, friendship, and overall generous support to aviation. Ford used his Cessna Caravan to transport doctors and medical supplies to Haiti early this year after the earthquake there, and he has used his Bell helicopter to assist in search-and-rescue missions.

The caption on Ford's trophy reads: “For engaging our nation’s youth in aviation and inspiring tomorrow’s leaders, innovators and enthusiasts to secure a strong future for all of aviation.”

After the introductions, NAA played a specially made video further portraying Ford's humanitarian activities for aviation and his passion for flight, including his frequent flights in his de Havilland Beaver into backcountry airstrips with aviation buddies. An emotional Ford teared up during the video.

During his speech, the actor credited his pilot, Terry Bender, for getting him started in flying. Ford had taken a few flying lessons in college in Wisconsin before running out of money. Later, as his movie career took off, he was flying in the back of his Gulfstream business jet flown by Bender when Ford realized the pilots up front were having all the fun. He encouraged Bender to get his flight instructor certificate. He did, and taught Ford to fly.

The theme of Ford's speech was unity. He noted the tremendous benefits a strong aviation industry has brought the United States over the last century—technology, jobs, respect, and pride. To keep aviation strong, he encouraged all segments of aviation—the airlines, manufacturers, the military, regulators, and general aviation to put aside their differences and to work together to advance aviation across the spectrum. To do so will preserve American leadership in aviation for our children and grandchildren, he said.