Get the app Get the app
News & Media Electromagnetic catapult tested 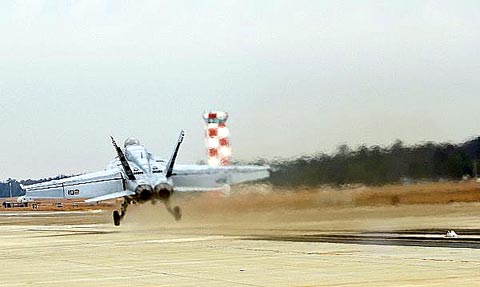 The old steam catapult used on aircraft carriers is approaching the end of its capabilities as new-technology aircraft grow heavier. That’s why the Navy is testing an electromagnetic aircraft launch system.

It works. An F/A-18E Super Hornet was launched during a ground test of the system at Naval Air Systems Command in Lakehurst, N.J. The Navy has used steam catapults for more than 50 years to launch aircraft from aircraft carriers. The new system is a complete carrier-based launch system designed for Gerald R. Ford (CVN 78) and future Ford-class carriers.

Newer, heavier, and faster aircraft will result in launch energy requirements approaching the limits of the steam catapult, increasing maintenance on the system. The system's technology allows for a smooth acceleration at both high and low speeds. It can also launch lightweight aerial drones.

The first ship components are on schedule to be delivered to CVN 78 in 2011.