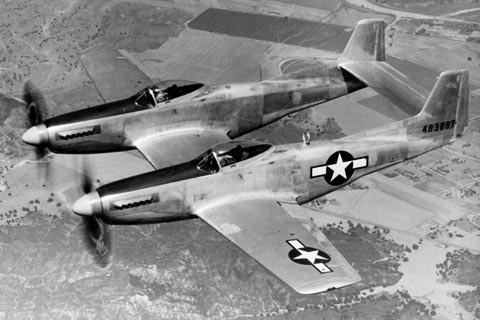 One is powered by an Allison engine and is owned by an individual who would rather not have his project in the spotlight until the project is completed. The other is powered by the famous Rolls-Royce Merlin engine and was the first Twin Mustang to fly, the XP-82-NA. It is owned by Tom Reilly of Douglas, Ga., who is performing the work with friends under a company called B-25 Group, LLC. He also operates Tom Reilly Vintage Aircraft and has restored 10 North American B-25 Mitchell bombers and several Boeing B-17s, including Liberty Bell.

Twin Mustangs emerged from the factory too late for World War II, but were flown in the Korean War and were later used for ramjet testing and icing research in the 1950s by the National Advisory Committee for Aeronautics (NACA), succeeded by NASA. The P-82 models were intended for pursuit, while the F-82 models were considered to be fighters.

Reilly and his crew have invested two-and-a-half years in the restoration of the aircraft, which first flew April 15, 1945. That includes preserving graffiti found from the time of manufacture, including a message from one worker to another saying, “I’ll bring in the tickets to the theater tomorrow.” Reilly plans to open a website on his project in January. He estimates another 18 to 24 months of work is required. A third Twin Mustang once owned by the Commemorative Air Force has gone to the U.S. Air Force Museum after a legal battle.

Reilly said he was fortunate to locate a Merlin engine found in the garage of a home in Mexico City. Both his aircraft and the other one in restoration will use modern MT Propeller composite propellers. The propellers use a Kevlar cover over beech and spruce wooden cores. The special spruce wood required is grown only at elevations between 6,800 feet and 10,500 feet. The beech wood is compressed in a 10-ton press to increase its density. American distributor Flight Resource said the four-blade propellers will have a diameter of 11 feet and be fully featherable, yet retain the period look of the original propellers.