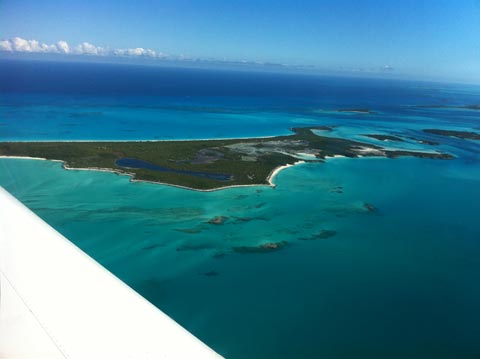 A fleet of light sport aircraft made a trek to the Bahamas earlier this month in recognition of the fact that LSAs are now permitted to fly there. The first International Light Sport Flyout departed from Fort Lauderdale, Fla., and landed at Grand Bahamas International Airport.

Flying over the ocean was no big deal, according to Remos Aircraft Marketing Director Earl Boyter. Remos was a co-sponsor of the event. “In fact, I am pretty sure the airplanes didn’t know the difference,” he said. Boyter said he carried a life raft and life jackets in the Remos he flew.

The 17 airplanes were welcomed by the Bahamas Department of Tourism, greeting them with drinks and fresh conch fritters. The group spent three days enjoying the island, and many returned to the airport to participate in flights around Freeport and some of the other islands. “I believe it was a discovery flight for a lot of the pilots,” Boyter said. “They were learning about the kind of fun you can have with an LSA.”

Meanwhile, a Flight Design CTLS and an experimental Kis Cruiser also launched from Florida on Dec. 11 for a run at the Bahamas. The CTLS, flown by Anthony Perea of Premier One Aviation in Miami, stopped in Exuma and Provo, Turks and Caicos, before heading to San Juan, Puerto Rico.

While in Puerto Rico, Perea said, he met with the Federacion de Aviacion Deportiva ( Federation of Sport Aviation) and also representatives of the Silver Wings Academy flight school to promote the use of LSAs for training and fun flying. Perea said it was the first time that a CTLS had flown to Puerto Rico. On hand to welcome the pilots were Margarita Arroyo, operations manager and chief controller for Luis Munoz Marin International Airport, and Harry Rivera, operations manager and chief controller for Fernando Luis Ribas Dominicci Airport in Isla Grande.

If you are contemplating a trip to the Bahamas, be sure to read up on the requirements for flying outside of the United States. AOPA has the information you’ll need, plus an online tutorial covering the Customs and Border Protection’s Electronic Advance Passenger Information System, known as eAPIS. If you have additional questions about flying overseas, call the Pilot Information Center at 800/USA-AOPA weekdays from 8:30 a.m. to 6 p.m. Eastern.