He did it again

Click the image above to view a slideshow. When last we heard from Robert Gannon he was exploring the world by Cessna 182. 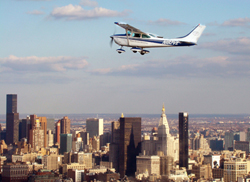 When last we heard from Robert Gannon he was exploring the world by Cessna 182. Since then, and that was only a few months ago, he has circled the world yet again. Why does he do it? As he said previously, “Because I can.” He comes home and works for a few months to take care of his company business, then heads off to continue his adventure. He often parks the airplane somewhere in the world to make a brief trip home.

His wanderlust began nine years ago and shows no signs of abating. Most recently he watched while 450 natives in Canada took five days to cut up a 60-ton whale and was in Belgium in time for the fall colors. After that it was on to Spain followed by the lush island of the Azores. Then he hitched a ride on the backside of a storm to fly to Newfoundland. We’ve prepared a slide show of his adventures on AOPA Online.

Author of ‘Above’ book series dies

The aerial perspective is one of the big reasons we fly, and none was better at capturing it than Robert Cameron. Although not a pilot, the 98-year-old photographer undoubtedly sparked a dream of flight among many future and present pilots. His 15 coffee table books in the “Above” series over 40 years sold 3 million copies. He died November 10, 2009.

Three months before he died Cameron was hanging out the door of a helicopter photographing one of his favorite scenes, the twisting switchback turns of Lombard Street in San Francisco. He had just completed a show taken from all the photographs of his life and presented at the Metreon shopping center in downtown San Francisco.

On his last flight he had only partial vision in one eye and carried a business card that read, “Robert Cameron, World’s Oldest One-Eyed Aerial Photographer.” Survivors include a girlfriend. His wife died in 2003.

While best known for the “Above” series, he also produced well-known panoramas from aerial photographs.

Bob Cameron waited four days for a storm to pass, and when it did he immediately jumped into a helicopter with his camera. A six-foot by 10-foot mural was made from this image, and you can count the stripes on the American flag on the island.

Couple celebrates 30 years in the sky

Suzanne Asbury-Oliver and Steve Oliver are celebrating 30 years of aerobatic performing and writing in the sky. Think about that for a moment. What would your friends say if you quit your job to be a skywriter or nighttime aerobatic performer?

Suzanne was the Pepsi skywriter for 23 years before Pepsi pulled out and Oregon Aero took over, while Steve is a daytime and nighttime aerobatic performer. Suzanne’s 1929 Pepsi skywriting biplane hangs in the National Air and Space Museum. The two performers are both amazed at their luck.

“It works because we have the same interests,” says Steve. “Everything clicked for us from the start. It’s like everything was meant to be,” Steve said.

The couple, based in Steamboat Springs, Colorado, often lives on a 55-foot ocean-going Cape Horn steel trawler. “The fact that Steve and I can be together 24/7, that we’re a team in our personal and work lives, is amazing. In looking back over 30 years, it’s also the friendships we’ve made while traveling and performing that have made our lives so special.”

Steve and Suzanne adopted Pax, their mascot dog, in 1997 from the Salisbury, Maryland, dog pound when she was eight months old. Pax is named for the first airshow the dog attended at Patuxent (Pax) River Naval Air Station, Maryland.

Yves Rossy, the former Swiss fighter pilot known for strapping a wing to his back with four tiny engines and turning himself into a jet, failed to fly successfully from Morroco to Spain. He wants to try in 2010 but first must find his wing beneath the sea.

Rossy attempted in late November 2009 to fly from Tangier in Morocco to Atlanterra in southern Spain at 140 mph in 13 minutes. Heavy cloud cover made the eight-foot wing more difficult to fly than usual, so he cut it loose and parachuted into the Strait of Gibraltar.

Rossy takes off in a Pilatus Porter, puts the wing on his back, and turns on the engines inside the airplane. Then he jumps at 8,200 feet, deploys winglets, and stabilizes the wing. At 6,500 feet he is flying. Using a fuel lever, his only control, he then powers up and can fly 10 minutes. He navigates by sight and maneuvers with head, shoulders, and arms. If he wants to go right, he shifts in that direction. His dream is that the powered wing catches on and friends join him in formation for the ultimate in freedom of flight.

Planning to attend the twenty-first International Women in Aviation Conference, February 25 through 27 at Disney’s Coronado Springs Resort in Orlando, Florida? AOPA’s booth at the conference will have a “Fun to Fly” theme, and will promote the 2010 AOPA Fun to Fly Sweepstakes and its prize, a brand-new Remos GX light sport aircraft.

Kathleen Vasconcelos, director of operations for the AOPA Air Safety Foundation, will present “What Went Wrong?” at 7:30 p.m. Thursday, February 25. The safety seminar is open to the public.

The conference theme is “Aviation—It’s a Small World.” For more information or to register, visit the Web site.

Is that an airplane in my mall?

Chesapeake Sport Pilot in Maryland placed a light sport aircraft outside a large department store during the holiday shopping rush. They staffed the airplane in the hopes of attracting potential pilots among the throngs. USAviation did the same thing at a mall in Lewisville, Texas, and Air Orlando positioned a Remos GX inside a Florida mall. (With its folding wings, the Remos makes this kind of display setup pretty smooth.)

And a brand-new flight school owner is using a pricing scheme for flight instruction and aircraft rental that he says gives customers a “round number” so that they can more adequately budget their training expenses, just as they would for a fitness membership or a car payment. Tim Poole, who recently opened GT Aviation at Potomac Airfield in the Washington, D.C., Flight Restricted Zone, calls it a kind of a “club” format. A monthly fee purchases five hours per month, or one lesson per week; a higher fee bumps that up to 10 hours, or two lessons per week. —Jill W. Tallman

PS Engineering’s new PMA6000B is a low-cost certified audio panel with many of the features of the company’s more expensive offerings, but in a smaller and lighter package. It includes a four-place intercom, a mode for split communication, a music interface, and more.

The day has finally come—Jeppesen charts are now available on a portable reader courtesy of SolidFX and the FX10. SolidFX uses a branded iRex reader to provide Jeppesen charts at almost real size.

The FX10 has many advantages over NACO chart readers on the market today, most notably in search capability. Bringing up a plate couldn’t be easier, and switching between plates, as one might need to do for an arrival procedure and approach, is quick as well.

Options for navigation include a stylus or buttons. Each has its ups and down, but the stylus seems to be fastest.

The drawbacks of the system are the same as all electronic readers: Where do you put it in the cockpit? There’s a learning curve initially, and paper doesn’t use a battery or a microprocessor. But that being said, the FX10 is the only option for the pilot who must have Jeppesen charts electronically, and it’s a good one at that.