Lessons from flying in the wilderness

The coulee country of eastern Washington, named for its deep, narrow canyons, is unique and spectacular. Just now, I was coming from the northwest over a shoulder of sage land and basalt cliffs in preparation for landing across Banks Lake at Grand Coulee Dam Airport. 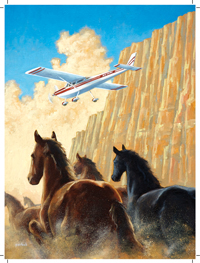 The coulee country of eastern Washington, named for its deep, narrow canyons, is unique and spectacular. Just now, I was coming from the northwest over a shoulder of sage land and basalt cliffs in preparation for landing across Banks Lake at Grand Coulee Dam Airport. It’s a little gem of an airfield—tidy, well maintained, sitting at lake level, looking out to enchanted coves and cliffs across blue water. Leaning forward, the rear passenger taps my shoulder and points, “Look, wild horses! Do you see them?”

We had begun the morning by heading north and east over the Cascade Mountains, threading our way between 12,281-foot Mount Adams and Gilbert Peak in the Goat Rocks Wilderness Area that lay directly en route. As I crossed Rimrock Lake on my way out to the wide openness of eastern Washington, my ever-present flying mantra, “Where would I put it down now?” was mildly assuaged as I passed Tieton State, a one-way dirt runway at the foot of the lake and into the face of a cliff. Notes tell me that it was “naturally resurfaced” in 1980 with ash from the eruption of Mount St. Helens. Farther east, when the north/south string of volcanoes was behind me, I had looked down over areas where lava flows cooled and hardened into barren black acres looking like just-poured fudge, with a whiskering of scruffy pines the first to invade.

Then I was out over the semi-arid desert steppes of the Columbia Basin, with broad plains of sagebrush, contours of wheat fields, and outcroppings of columnar basalt. The uneven ruggedness of the landscape tells the story of the Missoula floods that took place here more than 1,200 years ago. This is the tail end of the country Norman MacLean describes in A River Runs Through It, when a massive glacial lake broke its ice dam and “spread the remains of Montana and Idaho mountains over hundreds of miles of the plains of eastern Washington.” Boulders, glacier, and tons of water ripped across the land, carving through granite and volcanic basalt, leaving potholes, promontories, tabletops, and coulees—all those deep, narrow canyons—in their wake. With walls of columnar basalt as deep as 4,000 feet, the 80-mile long Columbia Gorge forms the run-out to the west from the monster flood.

In the 1930s Grand Coulee Dam was built on the Columbia River in eastern Washington, transforming the landscape even further. Filling old watercourses and submerging miles of forest, Banks Lake and Roosevelt Lake formed on either side of the dam, which notably contains enough cement to build a sidewalk around the whole earth. It was here that the Bonneville Power Administration commissioned Woody Guthrie for one month to write songs for a documentary film about the series of dams being built, called the Columbia Basin Project. “Roll On, Columbia, Roll On” was one of the 26 songs he wrote that month.

It’s a bluebird sky, and my Cessna is a perfect vantage to the geology lesson below. But geology isn’t all that’s being observed today. My flight to central Washington today had been requested by the Colville tribe to take council members on a flight over their reservation to document land-use practices. The primary economic resource for the tribe is logging of their ponderosa pine and Douglas fir timberlands. Wanting to document the resource, and whether the current level of logging is sustainable, today’s was the second of three flights over a two-year period.

With videos and photographs from the aerial perspective, their plan was to produce a presentation to share with the tribe in order to collectively better understand their land. When it was time to vote on land-use practices, the images from these flights would offer accurate representation of their resource. As a pilot for LightHawk, this was one of many flight requests I had responded to during my 15 years of flying in the volunteer corps. LightHawk provides donated flights in the United States and Mesoamerica to accelerate the efforts of its conservation partners. LightHawk is supported by individuals, organizations, and foundations that believe the aerial perspective can be a powerful tool to protect and preserve habitat and wildlife.

I landed, taxied to parking, and opened the door to sage-scented air. My passengers had not arrived yet, so I hiked up the hill and opened the gate, noticing deer tracks along the path. Soon enough, three members of the Colville Indian Environmental Protection Alliance drove up; I clanked the gate shut behind them and met them back down at the ramp. We made introductions, spread a sectional chart out over the aircraft’s tail, and discussed routes, highlights, and what they hoped to gain from the flight.

Then it was my turn, and I showed each passenger the location of his or her own air sickness bag, pointing out that the blue paper cover was old and worn and creased, but the bag hadn’t been needed. Then I admonished everyone to let me know if they were feeling so inclined, and we could slow down, stop circling, or land if needed.

My intro continued—“The headset doesn’t work until I’ve started the airplane. We’ll all do a check to make sure we can all hear one another; if you can hear you in your headset, we can hear you.” Last, I explained the procedures should we need to land in a cornfield instead of back at the airport. In all my flying and giving these preflight instructions, only one person has ever pointed out we are not in corn country, so I keep using it. The instructions about seatbelts, barf bags, and headsets performs another important but less obvious function before we take to the sky—it breaks the ice, gets the nervous laughter out of the way, and as a result, invites questions, dialog, and a more effective flight.

We spent an hour and a half overflying much of the Colville reservation’s 1.4 million acres. This land, rugged and forested, is bordered by Lake Roosevelt and the Columbia and Okanogan rivers; it’s dotted with smaller lakes, streams, meadows, and sage hills. Our flight covered lots of varied territory and revealed many stories.

The front-seat passenger acted as guide for the flight and shared his knowledge of the region. He told stories of animals that lived in certain areas, pointed out the knoll where he got his first deer, and recounted a scary encounter he once had with a bear. He knew the people and families who had lived in one place for generations. He knew species of trees and their growth habits, pine bark beetles and their life cycles, years of burns or logging, and sites for future cuts.

Each of my passengers had hunted, hiked, and explored the area. Each one was articulate, well spoken, and knowledgeable about the issues, history, and connectivity of the land. Names of creeks, ridges, and meadows—all were recognized and touched upon. History from pre-white to the present was shared. Information from each add ed a little more or a different dimension to the whole conversation.

By the time we were headed back over the shoulder of land to the west of the dam, looking at the lake, appraising the cliffs, and examining the inviting bays, shores, and waters, I had received far more than I had donated that day with my airplane and piloting skills.

We circled the sage-covered hillside one more time—and yes, there, with a shake of mane and scattering of dust, the wild horses galloped away as we entered the pattern to land.

As a volunteer pilot for LightHawk, Jane Nicolai responded to a flight request by the Colville tribe, coordinated by LightHawk’s Pacific program manager.