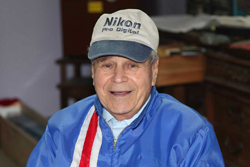 Click the image above to view several of Howard Levy’s photos taken for "AOPA Pilot" in the 1960s. Photo by Glenn Stott.

Photographer Howard Levy shot aviation photos continuously starting in 1936 with a few years off for World War II. Even then he was a photographer for the Army Air Corps. The dedicated aviation photographer died Jan. 29 at his home in New Jersey at the age of 88.

One of Levy’s earliest stories involved interviewing Howard Hughes. In the 1930s he got out his notebook and sat on a picnic table on Long Island to talk with Hughes who, in that decade, was setting aviation records and becoming a public hero. At the time Hughes was promoting a new airplane, but the model has been lost to history. Levy told friends Hughes was then just a normal guy who loved airplanes.

Levy became an assistant editor at Look magazine for 25 years until it folded. During that time he worked with a young kid who loved photography and seemed interested in space exploration. Levy mentored the young man until he, Stanley Kubrick, left to make movies, including 2001: A Space Odyssey.

Levy helped found historical societies, authored articles, and continued to photograph. His work appeared in Smithsonian, AOPA Pilot, Sport Pilot, Private Pilot, Kitplanes, Pro Pilot, Jane’s, and Air Progress. He was published in England, France, Italy, and Germany. In his final decade he received three lifetime achievement awards from various organizations. Last May he was in Delaware shooting an air-to-air photo session of a MiG-21 at age 88.

In late January his friend and fellow pilot, Glenn Stott, called to give him a ride to a weekly Sunday meeting at a nearby hangar. There was no return call, unusual for Levy, who was also a regular at the monthly meeting of his EAA chapter. Stott went to the house on Jan. 29 with Levy’s family and discovered Levy had died.

“Everywhere you go, people knew him,” Stott said. An EAA official said that at 88 Levy had twice the drive of journalists half his age.