Get the app Get the app
AOPA will be closed July 4th, in observance of the Independence Day holiday. We will reopen at 8:30 am ET on Tuesday, July 5.
News & Media Haiti relief: Trading chocolate for rice

Photos courtesy of G.O. Ministries, except where noted.

John Arnold was enjoying the Hershey Chocolatefest with his family in Pennsylvania Jan. 17 when he got the message: an e-mail from the Pilatus Owners and Pilots Association alerting its members of the need to help ferry relief supplies to Haiti just days after the devastating earthquake.

“I heard in the news how deplorable things were, and I felt terrible,” Arnold said. 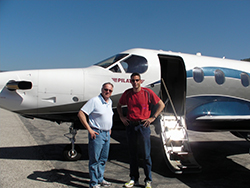 After talking to his wife, he immediately started planning the flight in his Pilatus PC-12 NG with friend Jim Adair. Arnold had flown internationally before, but he’d only flown to the Caribbean a few times. He also meticulously planned his international flights at least a week in advance, but he didn’t have that much time now.

By 11:30 p.m. that same day, the two men were in Fort Lauderdale, Fla., ready to offer their services. Arnold simply had a cell phone number and the first name of the man who could help them get supplies. They spent the night sleeping in chairs at Banyan Air Service at the airport and awoke early the next morning to load the Pilatus. After packing 1,300 pounds of relief supplies—water, baby formula, soy milk, and rice—they headed for Jacmel, Haiti.

As they flew over Port-au-Prince, Arnold recalled, “You just felt like you were in the middle of a CNN story, and you kind of were.” 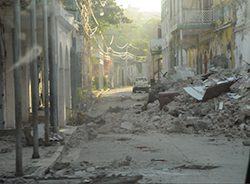 The two weren’t sure what to expect upon arriving at the 3,000-foot strip in Jacmel—the condition of the runway, airport security, etc.—so they created backup plans in case they could not land or needed to leave quickly. Fortunately, U.N. troops from Sri Lanka had secured the airport, the runway was in good condition, and there were no signs of unrest, unlike some of the images pouring in from the media from other parts of Haiti.

After clearing customs in Jacmel, Arnold and Adair worked with teenage boys from the Joy in Hope orphanage in the area to unload the cargo. The plan was to return to Fort Lauderdale to pick up more supplies, but the two learned about aid in Santiago in the Dominican Republic that needed to be ferried. So, plans changed.

Upon landing in Santiago, Arnold and Adair cleared customs and told officials they were there to pick up supplies—but they had no contact name or information for whom they were supposed to help. 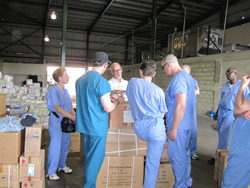 “It isn’t like one big coordinated Red Cross effort,” Arnold said, referring to the many organizations and people he worked with to make the flights. “This was just a bunch of people.”

“It felt so good, we just stumbled step by step into this,” he said.

They stumbled into the hands of Ken George, a missionary stationed in the Dominican Republic with G.O. Ministries who is organizing the flights from Santiago to Jacmel. G.O. Ministries is a Christian nonprofit organization based in Louisville, Ky., that fosters short-term missions and global partnerships in ministry. George, who had no prior experience with aviation, became the flight coordinator at Santiago, working out the logistics for loading supplies, refueling aircraft, and filing flight plans.

“Every time the planes whir up, and they start their engines and they take off, again I get a lump in my throat because I realize that we are making a difference,” George said in a video blog.

During Arnold and Adair’s day and half in the Dominican Republic—they stayed overnight sleeping on the top bed of a three-level bunk in the mission house—they completed only four shuttle flights because of the long waits for filing their flight plan to fly from the Dominican Republic to Haiti. “We waited hours sometimes to take off,” Arnold said. Since then, the flight plan filing process has been streamlined, so “guys can make a ton of turns.” One aircraft landed, refueled, was loaded with supplies, and took off within 17 minutes. 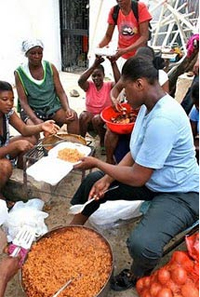 Every trip included water, soy milk, and rice, but they also took clothing, towels, spaghetti, beans, Styrofoam containers, and even a 10-pound bag of garlic cloves.

The food he ferried was dispersed to the community the same day he dropped off the supplies. Pastors and priests from the area around Jacmel had gathered to assess the needs of their communities and discuss how to disperse the food. The key, Arnold said, to the quick dissemination of the supplies were the established relationships of the missionaries, orphanages, and churches in the communities. Because they knew everyone, they could meet their needs quickly. G.O. Ministries has worked in Haiti and the Dominican Republic for more than 20 years.

Upon returning to the United States, Arnold visited the G.O. Ministries Web site and saw just how important those Styrofoam containers were—pictures of children or adults eating food from those containers. 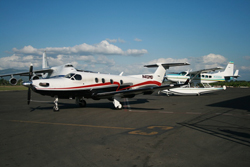 “I felt a little guilty about coming back, but I had to, workwise,” Arnold said. But he didn’t get much work done the first day back on the job at Petroleum Products, Corp. He had posted the need for pilots on several Web sites, so fellow aviators contacted him throughout the day for specifics on the flight to Haiti and airport information in Jacmel and Santiago. Arnold gave them as much information as he could about Jacmel: Runway 36 slopes up, Runway 18 down; watch for rising terrain when departing Runway 36; the breeze always blows from the ocean; palm trees are at both ends of the runway; no tower, fuel, or instrument approaches; airport is secure.

Experience pays off in time of crisis 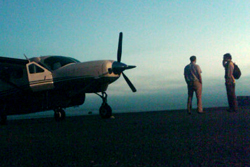 Arnold, who has been flying for 11 years, is a 2,500-hour instrument-rated commercial pilot with a single-pilot type rating in his Citation Mustang. He’s been flying PC-12s since 2003. Although Arnold frequently flies to Canada, has flown to the Caribbean, and is comfortable with eAPIS (Customs and Border Protection’s Electronic Advance Passenger Information System) requirements, he still wanted support for the flight. Adair, a longtime friend of Arnold, also served as his initial flight instructor and was a natural choice as a fellow pilot for the Haiti mission.

Even with two experienced pilots on board, Arnold didn’t want to take a chance with eAPIS even though “it’s really not a difficult thing to do.” Pilots are required to enter their flight information and passenger manifest online through eAPIS before entering or leaving the United States. Arnold wasn’t sure if he would have access to the Internet from Haiti, so he had a mentor pilot in the United States on call ready to file his return information.

“It felt really good to put all that experience together to help,” Arnold said of the training and familiarity with international operations.

Experience kicked in for George as well, even though he had never worked in aviation. 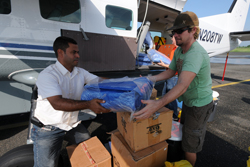 George and his wife, Karen, lived in Cary, N.C., for 21 years before moving to the Dominican Republic as full-time missionaries through G.O. Ministries. George owns a computer company in the United States, NetSmart, Inc., and specializes in logistics. For the past three years in Santiago, George has facilitated short-term mission trips and maintained the ministry’s fleet of vehicles and dormitories. After the earthquake hit, George’s background in logistics landed him in the role of “planes and cargo coordinator.”

He’s used to hosting 10 to 80 teens and adults on short-term mission trips, so switching to pilots and doctors was simple. His group had housing for them and helped them get to the Santiago airport and clear customs. In fact, helping the pilots, doctors, and others flying in and out is exactly the same as the short-term trips, except that G.O. Ministries simply launches the pilots and doctors from Santiago instead of going with them to Haiti.

George also attributes his ability to move people quickly not only to his practice with short-term teams, but also with his own “team.” He and his wife have six children. “If you can get six children to church on time,” George said, you can move pilots. 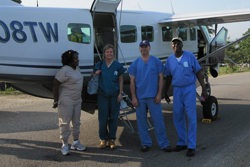 Workers strike a pose in front of a Tradewind Aviation Caravan assisting in the relief efforts.

In the days after the earthquake, G.O. Ministries worked with Santiago airport officials to waive all landing, takeoff, overnight, baggage, and flight plan fees for the relief flights. The airport even donated the use of a warehouse for the group to store and pack all of the supplies.

“All of our donations that come in are going to buy stuff and get it there,” George said, adding that none of it was being used for infrastructure because of the deal worked out with the airport and the efforts of the volunteer pilots. As of Jan. 23, more than 72,000 pounds of medical supplies, food, and water had been delivered from Santiago to Haiti through G.O. Ministries. All of the food and water is purchased wholesale in the Dominican Republic, George said, so that the effort helps both countries. He also said the money saved on jet fuel by flying multiple trips between the Dominican Republic and Haiti rather than southern Florida and Haiti allows more to be spent on purchasing supplies. And shorter flights mean more trips.

George has ironed out all of the kinks Arnold and Adair experienced. They were there just days after the flights from Santiago started, so the process is much more efficient heading into its nineteenth day of operation. “He thought it was efficient then,” George said of Arnold, explaining that now they can complete 15 to 25 flights a day (instead of four), depending on the number of volunteer pilots available. “When there was a squeaky wheel, they were patient,” George said of the two pilots. 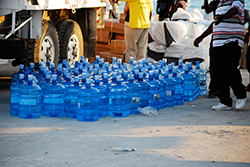 The key to building an efficient process, according to George, is applying more resources to the area creating the bottle neck. The problem in Santiago was loading the carts and having them ready to go on the aircraft. Now, carts are loaded and ready two airplane loads in advance. Problem solved.

While George has only been to Haiti once since the earthquake, flying in to a grass strip where refugees were receiving food, pilots keep him informed of the process on the other end of the flight. They bring George pictures and share stories of the unloading and distribution process in Jacmel, Leogene, and other areas where they are landing. Leogene, a grass strip, didn’t have an identifier until private pilots starting ferrying supplies into there and talked to the locals.

‘We all may need to go to the well again’

Even though George is running a smooth operation at Santiago, he’s not resting on his heels. He’s always looking for ways to improve efficiency and look ahead to see what their next mission will be. A month from now, George suggests that they will switch from ferrying supplies to ferrying doctors. Many doctors and nurses in Haiti were killed in the earthquake, so more will need to be transported in, especially as those with amputations begin to heal and can be fitted with prosthetics.

Arnold is looking ahead as well. He plans to conduct more flights for George in two weeks and anticipates using long weekends to continue helping in Haiti and the Dominican Republic. 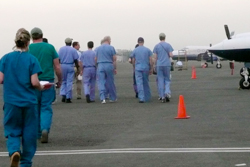 “We all may need to go to the well again several times until the relief agencies and governments get surer footing. I’m sure I speak for everyone that’s helped—once you go down, fly some missions, and see the good that the missions did, it’s hard to just come home and say, ‘Well, I did my part and that’s that,’” Arnold wrote to AOPA. “Because what we all did was materially meaningful and you saw with your own eyes and heard with your own ears the need, I think we all want to continue helping as we can, as long as we’re needed.”