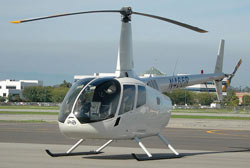 Robinson Helicopter, Inc. is accepting orders for the new R66 turbine-powered helicopter. The company also has stated that the R66 will be sold through the Robinson dealer network, and it is currently accepting R66 dealer applications.

The new helicopter, which first flew in 2007, is powered by a 225-hp Rolls-Royce RR300 turbine engine and marks the first turbine-powered helicopter in the company’s product line. The engine was built for Robinson and is a modern derivative of the proven Rolls-Royce Model 250 series engine.

The R66 shares the same look as the R44 but is slightly larger, allowing five seats instead of four. It is constructed from advanced composites, aluminum alloy sheet, and chromoly steel. The R66 has a projected empty weight of 1,270 pounds and a max gross weight of 2,570 pounds. It is designed to compete with the Bell 206, MD 500, and AS350 single-engine light turbines.

The base price with standard equipment is $770,000; the required non-refundable deposit is $75,000. Customers have been told that serial numbers will not be assigned and delivery dates will not be confirmed until after FAA certification is complete. The aircraft will be on display at Heli-Expo 2010 in Houston, Texas.