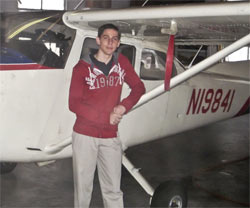 Tyler Whitney of Fenwick, Mich., took a Young Eagles flight in June 2008, and the bug bit: He wanted to learn to fly. This week, he became the first Young Eagle to pass the private pilot knowledge test using free access to Sporty’s online training course.

Sporty’s and the Experimental Aircraft Association announced a partnership in April 2009 to provide youngsters who take a Young Eagles flight with a free logbook and an access code that lets them take the Sporty’s online knowledge test course free of charge.

Founded in 1992, the EAA Young Eagles program provides opportunities for children ages 8 to 17 to take flights in general aviation airplanes with EAA member volunteer pilots. More than 1.5 million Young Eagles have taken flight through the program.

“After my Young Eagles flight I knew I had to fly. It’s what I want to do,” Tyler said. He is pursuing flight training with instructor Jeff Ostrander and hopes to earn a private pilot certificate on his seventeenth birthday.