Get the app Get the app
Already a member? Please login below for an enhanced experience. Not a member? Join today
News & Media Jet shipments to increase in 2011

Jet shipments to increase in 2011 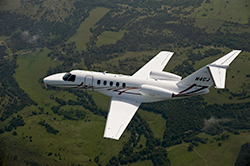 In the meantime, Cessna is preparing upgrades to current models and working quietly on new models that will enter the market when economic conditions improve. No details were provided on either upgrades or new jets. It is expected the $8.75 million Citation CJ4 will be certified in February, allowing deliveries to begin in the spring or early summer. The second production CJ4 is now in flight-testing. The aircraft has a maximum range of 2,000 nm.

Cessna delivered 289 Citation jets in 2009, but expects to deliver only 225 in 2010. Aircraft usage is no longer dropping and shows upward blips that indicates a recovery. The supply of used Citations is decreasing.