Get the app Get the app
AOPA Members DO more LEARN more SAVE more - Get MORE out of being a pilot - CLICK HERE
News & Media John King calling: Colorado pilot wins sweepstakes Skyhawk 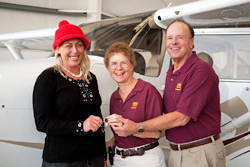 What would you do if, knee-deep in a King Schools online course, you picked up your telephone to find John King on the other end of the line?

That’s what happened to Colorado pilot Rhonda Doyle, who learned from King that she had won the 2010 King Schools Sweepstakes Cessna Skyhawk. “I was sitting at my desk, studying for my instrument rating and watching John King on my computer, when suddenly the phone rang and there he was on the line. I was a little confused at first, so when he told me that I had won I didn’t believe it. But, when Martha [King] joined in the conversation, I knew it was for real!”

King Schools gave away the Cessna 172 in its Future of Flight sweepstakes. The Cessna 172S Skyhawk has a Garmin G1000 glass panel with WAAS and a GFC700 autopilot.

Doyle is a commercial-rated pilot who supervises the Snowboard School at Telluride Ski Resort in Colorado. She hopes to become a tour pilot. A video of Doyle picking up her airplane at Montgomery Field in San Diego, Calif., is available online.