Get the app Get the app
AOPA will be closed July 4th, in observance of the Independence Day holiday. We will reopen at 8:30 am ET on Tuesday, July 5.
News & Media Design legend Leo Windecker dies 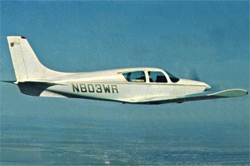 Windecker began work on the Eagle in 1961 as head of the Midland, Texas-based Windecker Industries, and certification was granted in 1969. Its slippery, all-fiberglass construction and 285-hp Continental IO-520 engine gave the Eagle 180-knot cruise speeds—speeds that bested the V-tail Bonanzas of the day.

Windecker felt that all-composite construction could have military applications, so in 1962, together with the Dow Chemical Company, he pitched an all-composite airplane concept to the Defense Department. Windecker’s own Eagle was used by the U.S. Air Force in tests of the airplane’s stealth properties. Air Force radar “saw” the Eagle’s engine and landing gear, but not its fuselage. Additional testing continued into the 1980s, but by then Windecker Industries had gone bankrupt. Today, only one Eagle survives. It’s in the inventory of airplanes held by National Air and Space Museum’s Udvar-Hazy site at Washington-Dulles International Airport.

In all, Windecker held 22 patents on composite technology for aircraft. Without a doubt, his pioneering work paved the way for today’s generation of composite-construction airplanes.