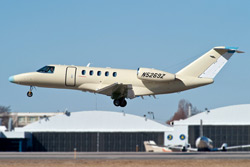 The first Citation CJ4 to be completed on Cessna’s new assembly line has made its first flight.

Cessna Citation CJ4 performance numbers are turning out to be much better than expected in speed, direct-climb altitude, and range.

Cessna originally promised a maximum speed of 435 knots true airspeed, but testing shows it is 452. The range was promised as 1,825 nautical miles with two crew and five passengers, but instead it will be 1,963. The aircraft will be capable of a direct climb (as opposed to step climbing), to 45,000 feet in 28 minutes instead of the promised 43,000 feet during the same time period.

The CJ4 is the fastest of the Citation 500 series jets. Cessna is in the final stages of certification on the CJ4, using three aircraft to meet FAA requirements.