Get the app Get the app
AOPA will be closed July 4th, in observance of the Independence Day holiday. We will reopen at 8:30 am ET on Tuesday, July 5.
News & Media Haiti relief: Equipped to act 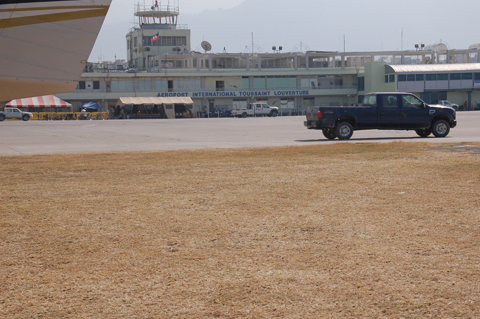 9:30 a.m. on a rainy, cold, Tuesday morning in Atlanta, Ga. Five relief workers, including a lawyer and a Creole-speaking doctor, are ready to take off from DeKalb-Peachtree Airport in a private airplane donated for the trip. On board with them, piled to the airplane’s ceiling, are boxes and bags stuffed with prescription drugs and medical equipment they will take to a clinic outside Port-au-Prince, Haiti.

For some on board, this is a return trip since the earthquake struck Jan. 12. For the 26-year-old pilot, Sean Sanders, it’s the tenth round-trip to Haiti in two weeks. As he climbs into the cockpit of the Pilatus PC-12, he tells his passengers to “put your hands on the ceiling when the plane starts to roll inverted.” It takes a second for someone to laugh at the joke.

When the earthquake hit, Sanders was in Florida flying potential buyers in the Pilatus PC-12 airplane for his employer, Epps Aviation. A few days later he started receiving e-mails from the Pilatus Owners and Pilots Association, pointing out some of the airplane’s unique capabilities to respond to the crisis. With 40 percent of his 2,600 flight hours logged in a Pilatus, Sanders realized he could help.

Turns out, the single engine turboprop is the perfect airplane to quickly and efficiently carry small relief teams and supplies. As his co-pilot for the trip, Chad Brammer, said, “There’re not many planes you can fly at 30,000 feet and land on a 2,000-foot grass strip.”

The Pilatus can also carry eight passengers, or more than 2,500 lbs. of cargo depending on its configuration. And it can fly round-trip from Florida to Haiti without refueling, a necessity in the early days after the earthquake. Another advantage: With a maximum speed of 280 knots, it’s fast. 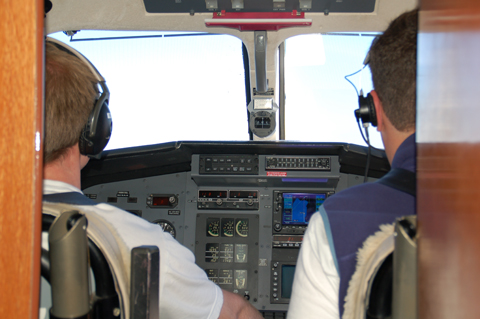 On his first trip, eight days after the quake, Sanders carried five orthopedic surgeons and nurses and about $500,000 worth of medical equipment from Atlanta’s Piedmont Hospital. He had 20 voicemails waiting on him when he landed that night at West Palm Beach, Fla., from people and relief organizations trying to get to Haiti. Ever since, Sanders has been lining up the needs with Pilatus owners willing to donate their aircraft for a day, or longer.

“It’s amazing how many owners have let us go to Haiti with their $3 [million] or $4 million airplane in our hands,” he said.

David Hirsch, from Marietta-based ECI Groups, a development company, loaned his Pilatus for the most recent flight from Atlanta to Port-au-Prince. Michael Rettig, an Atlanta businessman who leases Hirsch’s airplane, coordinated the trip, collecting thousands of dollars for the fuel and supplies through the Rettig Family Foundation.

“The world is separated by the doers and talkers,” Rettig said several days after the flight. Sean “inspired me to pick up the phone and just do it.”

10:30 a.m. In flight, Peter J. Anderson, senior law partner at Sutherland Asbill & Brennan, describes his last trip just after the earthquake, when he spent half an hour carefully removing a bandage from a young girl, whose leg had been amputated, because he didn’t want to hurt her. On this trip, Anderson, the treasurer of a faith-based organization called ServeHaiti, will return to his non-medical tasks at the group’s clinic about 50 miles northeast of Port-au-Prince.

The four-hour-and-twenty-minute flight parallels Florida’s East Coast, skirts Cuba, and then flies directly over the Bahamas before descending through Haiti’s green mountains. 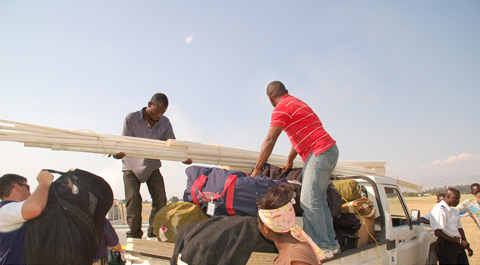 Jules Colastin (right, on top of truck) loads the truck with another driver.

Sanders taxis the aircraft to a grassy area, just off the tarmac. Two hulking military airplanes, an American C-17 and a Canadian C-130, dominate the small airport and loom over a dozen smaller airplanes, including a Gulfstream jet. According to Sanders and the two U.S. Customs agents who show up as soon as the hatch opens, the airport is far more calm than just the week before, when airplanes were forced to circle for an hour or more waiting for landing clearance.

As the supplies are loaded into a truck, Dr. Charmaine Lewis, a new mother from North Carolina who will spend a week working in ServeHaiti’s clinic, translates the words of Jules Colastin, their Haitian driver. “When he sees other countries coming here to help us, it’s immeasurable,” she says, trying to find the right English word. “What people are saying now is ‘God has blessed all of America.’”

3:30 p.m. After unloading the airplane and refueling, Sanders and Brammer take off, this time with two homeward-bound relief workers. The Pilatus flies 25 minutes northeast into the mountains, to a 3,700-foot grass strip near the small town of Pignon. As the aircraft lands, a goat chews grass on the edge of the runway. Sanders first found the strip two weeks before on Google Earth. The coordinates were “right on the money” he says.

4:20 p.m. The Pilatus takes off with two more homeward-bound volunteers on board, a husband-and-wife team from Chattanooga, Tenn., who joined their good friends at a mission nearby, called the Haitian American Friendship Foundation. 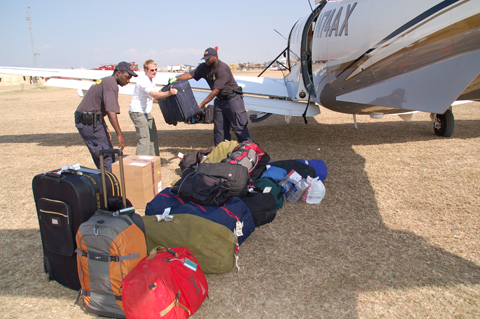 One of the travelers, Chuck Hans from North Georgia, is returning from his second trip as a volunteer for Operation Mobilization, a missionary organization based in Tyrone, Ga. On the first trip, the retired conservation officer for the Georgia Department of Natural Resources joined his former colleagues for search-and-rescue work. This time, he went back to address longer-term needs, visiting several overcrowded, understaffed orphanages that need basic supplies. “Someone needs to do a story on that,” Hans says.

7:20 p.m. Sanders lands the Pilatus in Ft. Lauderdale, Fla., after bad weather turned him back from West Palm Beach. The group goes through Customs there, showing passports and throwing out remaining food items.

The Chattanooga couple and a Haitian-American from Tampa, who translated for relief workers while checking on his own family, say goodbye. They’re getting home using other means.

8 p.m. The rain starts just as the pilots and passengers re-board the Pilatus. 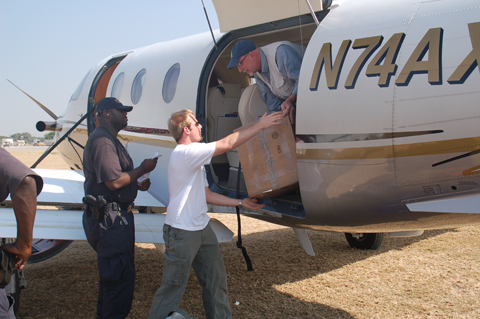 Peter J. Anderson is in the airplane, handing the box to pilot Sean Sanders

10:30 p.m. Sanders and Brammer land the airplane, back at DeKalb Peachtree 13 hours after the trip started. They had flown a total of 2,160 nautical miles. Sanders estimates a similar trip, if chartered, would have cost $14,000. This one was paid for by a combination of donations from Hirsch and the Rettig Family Foundation. Sanders also donated his time.

“We’re flying things right to the people that need them the most,” Sanders says. “We can’t save all of Haiti, but we can build relationships with some of the organizations and try to keep them viable.”