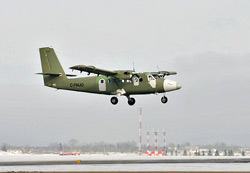 It is the first new production Twin Otter since de Havilland Canada ended production in 1988. Sold to launch customer Zimex Aviation of Switzerland, the first Twin Otter is equipped with Honeywell’s Apex IFR digital flight deck. The aircraft is to be used throughout North Africa servicing the oil and gas industry.

“This is a significant milestone, not only for Viking and our entire team, but also for our many customers,” commented company official David Curtis. “Flying the first new Twin Otter in 22 years is the culmination of many months of hard work and determination by our staff and supply chain partners.”

The first production aircraft has registration number C-FMJO in honor of Michael J. Orr, a former member of Viking’s board of directors. Orr was a strong supporter of the plan to re-start Twin Otter production. He died in 2006. In keeping with Viking tradition of naming aircraft, “Mikey” has been fondly added to the nose. Several of Orr’s family attended the first flight.

Viking announced the production relaunch of a modernized Twin Otter in March of 2007 with the introduction of the DHC-6 Series 400 model. It features a modernized flight deck and added safety systems. The main change is the addition of the Honeywell Primus Apex digital avionics suite, and Pratt and Whitney PT6A-34 turbines.