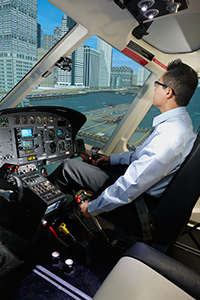 By this summer, helicopter pilots in mission training may experience new levels of fidelity in simulated flight. CAE announced that its new CAE 3000 series of simulators will incorporate a number of features guaranteed to make simulated missions seem very close to reality.

The simulators are being developed based on input from CAE’s Helicopter Advisory Board and are aimed at addressing the goal of international standardization of helicopter training tasks.

The CAE 3000 flight training device uses the company’s Tropos-6000 visual system with a direct projection dome. The result is a 220-degree horizontal by 80-degree vertical field of view display.

The imagery has very high definition and can create virtual scenarios that closely mimic real-world helicopter missions. For example, the simulator can be used to land at an automobile accident scene—but the fidelity extends beyond simply showing streets, cars, and buildings.

It’s the first simulator to incorporate artificially intelligent human forms and dynamic vehicle movements. Policemen direct traffic, a crowd moves away from the scene, and emergency medical personnel transport the injured from the crash to the side of the helicopter in this simulator. The same sorts of virtual reality are used for simulating operations around oil rig landing platforms, confined areas, rooftop landings, night flying, and inadvertent flying into instrument meteorological conditions.

The CAE 3000 can be made compatible with virtually every helicopter on the market. List prices depend on helicopter configuration and training requirements and will range from $4 million to approximately $10 million, according to CAE.