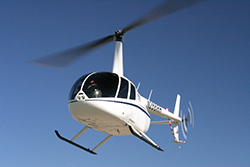 Robinson Helicopter is accepting non-refundable, $75,000 deposits for its new Roll-Royce RR3000-powered model R66. Base price for the standard version of the R66 is set at $770,000. The R66 is the first turbine-powered helicopter to be sold by Robinson, which previously centered on piston-powered trainers.

The R66 will have five seats and better performance than any previous Robinson helicopter. It will also be heavier. But signature Robinson features, such as the T-bar cyclic controls and two-blade rotor system, remain basically the same.

Robinson expects to have extensive R66 support in place by the end of 2010.

Company President Frank Robinson said that all efforts were now centered on earning FAA type certification of the R66, which he said “shouldn’t be too much longer.” Orders are coming in rapidly, he said, and initial production rates should start “at about two per week.” The Robinson factory has expanded its floor space by approximately 130,000 square feet to accommodate R66 production.

“It flies very much like the R44, but it’s a little smoother, a little quieter, and a little bit faster,” Robinson said. As for step-up training, Robinson said that this would take about “20 minutes or so, to learn the start sequence … otherwise, it handles just like an R44.” However, to qualify for insurance in the R66, he felt that the more R44 time a pilot has, the better.

Additional components and options are in the works. These include air conditioning, a police version, and pop-out floats.

Preliminary specifications were issued at Heli-Expo 2010.