Get the app Get the app
Already a member? Please login below for an enhanced experience. Not a member? Join today
News & Media AERO Friedrichshafen reaches new prominence 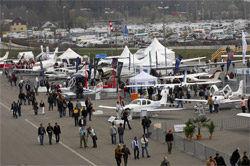 This year’s AERO Friedrichshafen trade fair, set for April 8 through 11 in Friedrichshafen, Germany, promises 450 exhibitors and high levels of international participation. Based on its past successes on a previously biennial schedule, AERO will now occur annually.

AERO is unique in that the show is both international in scope and devoted solely to general aviation. While the show is in Germany, exhibitors come from 25 nations, and non-German companies represent some 50 percent of exhibitors. The aircraft and products on display range from gliders and ultralights to light sport aircraft, helicopters, piston singles and twins, and light and medium business jets.

A unique feature of the show is its emphasis on “green” technology, dubbed the “E-Flight Expo.” Solar-powered aircraft are featured, as well as battery-powered aircraft and those powered by hybrid piston-electric powerplants. The E-Flight Expo will occupy one of the show’s nine exhibit halls, each of which has been designed as very large, open, and well-finished “hangars” that abut the static display area outside. 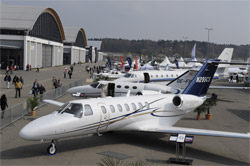 AOPA President Craig Fuller will address a conference at AERO. The conference is being held by the International Council of Aircraft Owner and Pilot Associations (IAOPA). IAOPA will have an expanded presence at this year’s AERO, complete with a larger exhibit area. Representatives from many IAOPA member organizations will be present to meet visitors, answer questions, and solicit comments from AOPA members and nonmembers alike.

Seminars and presentations by Fuller, manufacturers, government officials, and educators take place in AERO’s many meeting rooms. These rooms feature experts in simultaneous translation; non-native speakers are offered headsets to listen in on the translations. 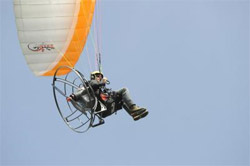 On April 10 and 11, an airshow will be held, featuring aerobatic demonstrations, and including formation glider aerobatics. Antique and current military jets will also be on hand, and there will be a performance by an Extra 330 and a model-plane replica.

During the week, visitors can take advantage of another unique aspect of AERO: rides on Zeppelin NT blimps. The Zeppelin factory is located at Friedrichshafen, and has been since the 1930s.