Get the app Get the app
Already a member? Please login below for an enhanced experience. Not a member? Join today
News & Media Pilot optional 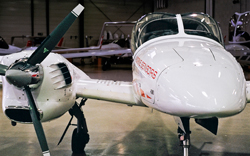 Aurora Flight Sciences at Manassas, Va., will equip this Diamond DA42 to operate with or without a pilot. Flight trials are set for this summer.

Its first mission will require a pilot and will involve radar mapping of the Greenland ice pack. Whenever the aircraft is to be used in a civilian airspace system, it will have a pilot. If military missions are involved, the pilot might want to stay on the ground. At the moment, the company has no military customer. Modifications will be paid for by Aurora. However, the company did hint in a press release that it has “roughly the same payload and range performance as the MQ-1 Predator UAV.”

The Aurora aircraft was originally used by Diamond as a prototype for the DA42 multipurpose platform program.