Get the app Get the app
AOPA Members DO more LEARN more SAVE more - Get MORE out of being a pilot - CLICK HERE
News & Media GA Serves America: Feeding the Delta

Ag pilots are essential to the farm economy

The sun hasn’t quite crested the flat horizon, but agricultural pilot Dennie Stokes is already strapped into the cockpit preparing for a marathon workday that will keep him and his turbine-powered Thrush swooping over the Mississippi delta until well beyond sunset. The wettest spring in memory has saturated rice, soybean, and wheat fields that stretch for miles in every direction from Stokes’ home airstrip in rural eastern Arkansas.

The sun hasn’t quite crested the flat horizon, but agricultural pilot Dennie Stokes is already strapped into the cockpit preparing for a marathon workday that will keep him and his turbine-powered Thrush swooping over the Mississippi delta until well beyond sunset.

The wettest spring in memory has saturated rice, soybean, and wheat fields that stretch for miles in every direction from Stokes’ home airstrip in rural eastern Arkansas. The farmers that are his neighbors, customers, and lifelong friends depend on Stokes and his company to sow and fertilize their crops and protect them from weeds, insects, and disease.

“Agricultural aviation is absolutely essential to the farm economy in this region,” said Stokes, 58, who has flown more than 30,000 hours since founding his business, Stokes Flying Service, 31 years ago. “In a year like this when the soil is saturated with rain and ground rigs can’t get into the fields, there wouldn’t even be a crop without ag aviation. There’s such a narrow time window for planting, fertilizing, and applying chemicals that it just couldn’t be done without airplanes.” 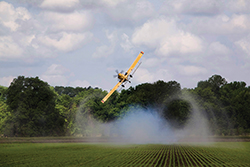 Ag flying is inherently hazardous with obstacles such as trees and power lines requiring constant attention.

Agriculture is the main industry in this region—and many of the crops are raised for export. Rice is the highest-value crop, and it goes into domestic food and beverages as well as overseas, where Arkansas rice is regarded as among the world’s premium brands. It’s also the most aviation-intensive crop, with each rice field getting about four aerial applications each season, and Stokes Flying Service has been built to accommodate it.

When Stokes began ag flying at age 19, all crop dusters—as they were known at the time—were powered by piston engines. Many were World War II-surplus Stearman biplanes that had been fitted with oversize radial engines and chemical “hoppers” in the front cockpits. The crop dusting name was accurate then because the airplanes dumped dry, dustlike chemicals on cotton crops.

Now, the crops, chemicals, and aircraft are much different. There are far fewer ag airplanes working the fields, but they are highly specialized, turbine powered, and each one is much more productive. 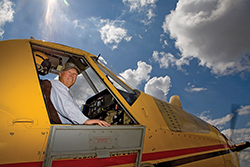 Veteran ag pilot Dennie Stokes runs his business from this air conditioned "office," which is equipped with two radios and a cell phone and travels across fields at about 140 mph.

Stokes Flying Service operates four Turbo Thrush aircraft built in Albany, Georgia, each one capable of carrying loads of between 550 and 660 gallons. Fully equipped with WAAS-enabled GPS systems that guide them across fields with two-foot accuracy, computerized flow controllers, and precision nozzles, new ag airplanes are technologically advanced machines that typically sell for $1 million or more.

For ag pilots, each pass through a farm field is like a hypersensitive localizer approach flown at 140 miles an hour. The GPS and its light-bar display on the top of the down-sloped cowling provide lateral guidance, but pilots are responsible for obstacle clearance. Each aircraft carries a wire cutter on the windshield, and a cable that stretches from the canopy to the top of the vertical stabilizer is meant for the same purpose.

Stokes has never wrecked an airplane during more than three decades of agricultural flying. But it’s an inherently hazardous occupation, and the airplane Stokes was flying on this morning was soon to be delivered to Louisiana to replace a similar model that had been destroyed in a flying mishap.

Knowing the dangers, Stokes was initially reluctant for his two sons to join him in the business. But Tracey, an ag pilot for the past 10 years, was determined to follow his dad’s career footsteps and began commercial pilot training soon after high school. Another son, Greg, operates ground rigs and manages information technology for the family business, and he recently became a private pilot and is gaining experience in tailwheel aircraft with a goal of flying ag airplanes in the future. 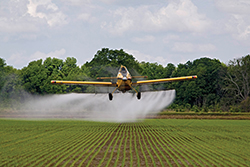 Ag pilots fly highly specialized, turbine aircraft such as the Thrush and are guided through fields by precise, WAAS-
enabled GPS systems.

The best ag pilots, Stokes said, understand agriculture and farmers’ needs implicitly, and they act almost as consultants or trusted advisors to their customers. When Tracey, for example, saw during a morning flight that a broken levy was preventing irrigation water from reaching a distant portion of a remote rice field, he relayed the information (via CB radio) to an office worker at the flying service, and the office worker informed the farmer by phone.

“That’s a piece of information I wouldn’t have discovered on my own,” said Lee Davis, an area farmer and customer. “They’re like having a set of eyes watching over everything we do.”

Stokes and the farmers he works with have long-term business relationships that reach across generations. Stokes may have worked with parents or grandparents whose sons and daughters are now operating farms in the area. In some cases, farmers plan their crops around the flying service’s capabilities. They’ll plant more rice, for example, in years when Stokes has additional airplanes and greater capacity.

Unlike some semi-migratory ag pilots who follow the seasons from the Gulf Coast to the upper plains and Canada each year, Stokes has enough work in his region to stay put year-round. Each ag season begins in late February or early March when he and his fellow pilots begin fertilizing fields; peaks in the hot, sultry Delta summer; and continues through the harvest in November.

Cotton was once king in this region, but it has given way to corn, soybeans, and other crops that can be used to meet expanding demand for biofuels. Surging commodity prices have helped the farm economy in recent years and allowed Stokes and his business to have some of their best years despite the overall slowdown in the U.S. and world economies. 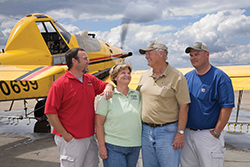 Stokes also is president of Mid-Continent Aircraft in Hayti, Missouri, a company that sells new Turbo Thrush and Cessna piston-engine aircraft and maintains ag airplanes. Ag aircraft sales have been one of the few bright spots in the aviation industry this year as demand has surged domestically and overseas, and Mid-Continent has a long record of delivering ag airplanes as far away as Australia, South America, Europe, and Africa.

Despite the long hours, inherent hazards, and the hurry-up-and-wait nature of weather-dependent agricultural work, Stokes said he’s genuinely excited going to work each morning because he’s never quite sure what each day will bring.

“You’ve got a plan at the beginning of each day, but it’s only a plan,” he said. “Circumstances usually conspire to complicate or alter those plans, and you’ve got to stay flexible and think ahead. I enjoy the mission-oriented nature of our work, and the fact that the service we provide is critical to the success of our customers. We’re part of the community here, people depend on us, and that makes me look forward to climbing in the airplane each day and going to work.”