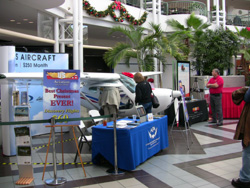 Parking an airplane in a mall during the busy holiday shopping season proved fruitful for a flight school in Texas, which sold nearly 170 introductory flights and also gathered leads on 130 possible aircraft partnerships.

US Aviation parked a Remos GX light sport aircraft inside the Vista Ridge Mall in Lewisville the day before Thanksgiving and removed it the day after Christmas, staffing it each hour that the mall was open.

“What we learned was that many people think about aviation, but fail to act on the impulse,” said Justin Shelley, director of aircraft sales for US Aviation. Putting an aircraft in their line of sight prompted passersby to stop and talk about pilot certification or ownership, he said. Many were surprised to learn that a sport pilot certificate can be earned in fewer hours and for less money, he said. Shelley was optimistic that a few dozen introductory flights would be converted into student pilots and perhaps a dozen others would become involved in partnerships or flying clubs. “We’ll know better in a couple months,” he said.

Reaching out to the public “really gets people fired up about flying,” Shelley said. “The airport is just too remote to many people and the mall brings aviation right into their daily lives.”