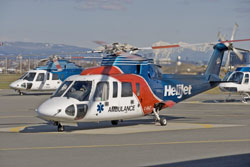 Two Sikorsky S-76 helicopters will be providing air ambulance services during the 2010 Olympic Games in Vancouver, British Columbia. Richmond’s Helijet International has been awarded the contract to provide the helicopters by BC Ambulance Service. The aircraft are now at Helijet’s facilities at Vancouver International Airport being mission configured for the contract. They are scheduled to become operational in late January and be on station until March 2010.

One of the helicopters will be located in Whistler near the athlete’s village and the other near the event venues at Cypress Mountain in North Vancouver. Both will be dedicated to providing ambulance and patient transfer services to medical facilities in Vancouver.

This new contract is in addition to Helijet’s existing BC Ambulance Service contracts. Every year, Helijet air ambulance pilots and BC Ambulance Service paramedics provide air medical transfers and critical care for approximately 600 adults and infant patients on Vancouver Island and in South Western British Columbia.

Helijet International Inc. began flying between Victoria and the mainland in 1986 and has carried more than 1.9 million passengers in the past 24 years.