Get the app Get the app
Already a member? Please login below for an enhanced experience. Not a member? Join today
News & Media 1911 airplane found in Antarctica 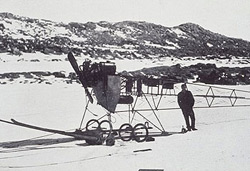 Pieces of a 1911 Vickers monoplane, the first model ever built by the famous English company, were discovered in Antarctica this month by a research team from the Mawson’s Huts Foundation.

In 1911 Antarctica was the equivalent of today’s moon exploration. Like the later Apollo moon missions, by 1911 public interest in Antarctica had dwindled and something was needed to renew the excitement. Australian explorer Sir Douglas Mawson decided an airplane might do the trick.

He bought a Vickers REP monoplane from England, although he didn’t have enough money and asked to pay for it later. This was a monoplane built in a shed decades prior to the Golden Era of biplane aviation. The aircraft entered an uncontrollable slip, aggravated by untimely turbulence, during flight trials in Australia prior to Mawson’s expedition. The wings were destroyed and have been lost to history. Mawson decided to take the fuselage and Gnome engine, and use it as an air tractor to pull sleds across the ice.

The aircraft engine wouldn’t start in such a cold climate, so the engine returned to Australia when the expedition was over and the fuselage was left behind. A few joints of the aircraft frame were found along the shore of the abandoned Mawson camp on New Year’s Day 2010.

The aircraft will never be reconstructed. There is a propeller for it in a museum in western Australia, a wheel in Tasmania at the Australian Antarctic Division, and part of the tail and a seat at Cape Denison, Australia.