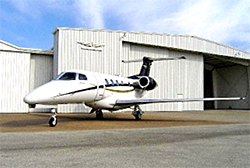 Embraer finished 2009 by delivering the first of its newly certified Phenom 300 business jets. The airplane went to Kansas City, Mo.-based Executive Flight Services, a subsidiary of fractional operator Executive AirShare. Four Executive Flight Services Phenom 100 pilots had been trained to fly Phenom 300s at the Embraer CAE Training Services site in Dallas. Because of the commonality between the Phenom 100 and Phenom 300, completion of a transition course was the only requirement—not a separate type rating.

Keith Plumb, president and COO of Executive AirShare, said, “As the world’s leading operator of Phenom 100 aircraft, we have been extremely pleased with the performance and low operating costs of this entry-level jet, and hold similarly high expectations for the Phenom 300.”