Former deputy sheriff to receive his wings through Able Flight 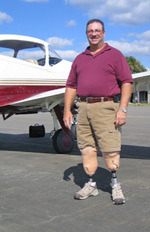 A law enforcement officer who lost his legs in an accident while he was assisting a stranded motorist is the newest recipient of a pilot scholarship from Able Flight with assistance from Bombardier.

Deputy Sheriff Dan Hodess is the first recipient of the Bombardier-Able Flight scholarship. Able Flight is a nonprofit organization whose goal is to help people with disabilities learn to fly.

On April 15, 1998, Hodess was on his way to work when he stopped to help a motorist on I-95 in Fort Lauderdale, Fla. While he was out of his cruiser, another car struck him and pinned him between the two vehicles. The 61-mph impact severed his legs. He spent several months in recovery and rehabilitation with new prosthetic limbs.

“We are pleased to work with Bombardier to create this opportunity for Dan as it recognizes his determination to continue to rebuild his life and to inspire others by doing so,” said Able Flight Executive Director Charles Stites.