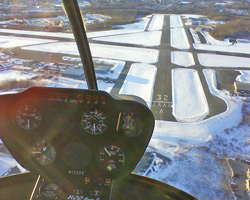 Massachusetts-based North Andover Flight Academy appears to be the first helicopter flight school in the world to successfully develop a FITS (FAA and Industry Training Standards) syllabus for its students. Currently in its fourth year, the program was developed by the FAA to design training focused on developing pilot judgment and decision-making skills in technically advanced aircraft. This program has been used successfully by large universities and fixed-wing aircraft manufacturers to train in various airplanes, but until now has not been widely used in the helicopter training environment.

The company’s commercial training syllabus uses scenario-based training to provide an effective helicopter training experience. Students who do their commercial training using the FITS syllabus will be exposed to an entirely new way to train in helicopters, including concepts such as Line Oriented Flight Training (LOFT) programs used by the airlines. The objective is to incorporate situations and circumstances faced every day by commercial helicopter pilots, and package these into scenarios that will develop better trained helicopter pilots. However, students at any level can benefit from this training, as the school can integrate FITS lessons into its standard curriculum. The instructors can build into each lesson the necessary maneuvers, which will represent a real-world situation, rather than just practicing in the airport pattern.

According to Curt Peredina, chief flight instructor, “A traditional lesson would finish with the instructor and student talking about the lesson and evaluating the maneuvers. This is followed with an instructor and student grading sheet (graded individually), which are compared after each has evaluated every part of the lesson using pre-planned evaluation criteria such as single-pilot resource management, navigation, and airport procedures.”

As helicopters become more complex (IFR capability, glass cockpits, and autopilots) this type of training will serve the industry well by preparing students for advanced cockpits early in their training.

North Andover Flight Academy is a Part 141 flight school with locations in Boston and New York. For more information, see the Web site.