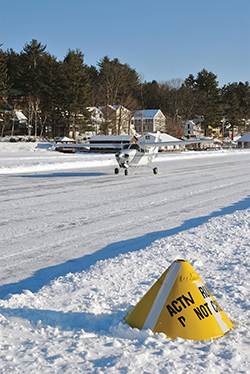 The ice runway at Alton Bay, N.H., opened for the 2010 season on Jan. 9—two weeks earlier than last year, thanks to colder temperatures, said Paul LaRochelle, the airport’s volunteer manager. The ice airport at the south end of Lake Winnipesaukee is the subject of a feature article, “ The iceway is open,” in the January issue of AOPA Pilot.

The runway has been plowed to 2,600 feet long and 90 feet wide, with a taxiway on the east side, LaRochelle said. Pilots planning to visit should first check notams for the ice runway. Notams are listed under B18, the identifier for the Alton Bay Seaplane Base ( B18); they share the same location on the lake.

In addition, updates on runway conditions can be obtained from a recorded message at 603/875-3498—different from the telephone number reported in AOPA Pilot. LaRochelle said he will update the message every couple of days, unless runway conditions necessitate an earlier revision.

This year’s Winter Festival—a popular annual event in Alton Bay that, when the weather is good, fills the ice airport’s parking area—is scheduled for Sunday, Feb. 14. “It’s going to be a very congested day,” LaRochelle said. “I suggest to people that they come early, maybe for breakfast, if they want a place to park.”