Get the app Get the app
AOPA will be closed July 4th, in observance of the Independence Day holiday. We will reopen at 8:30 am ET on Tuesday, July 5.
News & Media NASCAR aircraft offer aid to Haiti 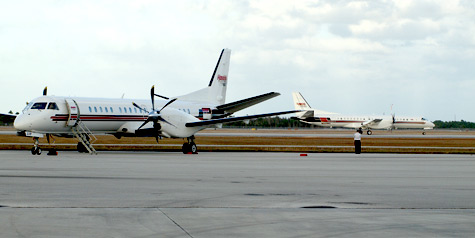 These Saab 2000 aircraft with crews were loaned to Missionary Flights International by Hendrick Motorsports and will fly through January.

The airplanes will transport both MFI support groups and supplies directly into Haiti. The Hendricks volunteers include aviation director Dave Dudley, who will oversee operations; five captain-level pilots; one operations manager; one mechanic; and two flight attendants.

No timeline has been set for how long these missions will continue. The Hendrick organization is covering all costs of the flights.