Get the app Get the app
AOPA will be closing at 2:30pm ET Wednesday, November 23rd, and will remain closed Thursday and Friday in observance of the Thanksgiving holiday. We will reopen Monday November 28th at 8:30am ET.
AOPA Members DO more LEARN more SAVE more - Get MORE out of being a pilot - CLICK HERE
News & Media Pilots step up to help Haiti

Pilots step up to help Haiti 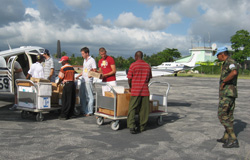 While many pilots are helping with the disaster relief efforts in Haiti by donating funds, some have connected with organizations and started using their aircraft to help deliver supplies.

General aviation pilots are still asked to not fly into Port-au-Prince to avoid interfering with relief efforts there, but some outlying airports in Haiti are open and pilots are delivering supplies to them from the Bahamas and Dominican Republic.

“As always, the GA community is demonstrating its tremendous compassion for those in need and taking immediate action to help,” said AOPA President Craig Fuller. “General aviation has the unique flexibility to use reliever airports to enhance the relief efforts taking place in Port-au-Prince. Working through a variety of humanitarian groups here in the United States and in Haiti, pilots are making a real difference.”

Bahamas Habitat began flying to airports around Port-au-Prince, including Cap Haitien and Les Cayes, from Inagua in the Southern Bahamas using Cessna 182s, Bonanzas, Barons, Aztecs, a Cessna 340, and a Caravan.

“Sunday was our third day of airlift operations into the outlying airports around Port-Au-Prince and we delivered a lot of medical supplies and evacuated 27 more people today,” Bahamas Habitat President John Armstrong announced in a press release Jan. 18.

The organization is seeking volunteers to help with the efforts, according to Armstrong. Pilots can sign up by visiting the Web site or sending an e-mail.

“We have had a rush of requests to help get people out and more medical supplies in. Private pilots with aircraft have been volunteering and making preparations to join the efforts from all over the country and even Canada. We have medical and other supplies in Nassau and Fort Lauderdale that need to be moved in and the list of people needing to be evacuated continues to grow,” Armstrong explained.

Pilots also can volunteer to help with the relief effort by signing up through the National Business Aviation Association’s Web site. Each day, the database of pilot volunteer information is shared with the Critical Incident Management Group (CIMG) at the Department of Homeland Security. Those agencies involved will then contact the volunteer pilots for missions when they are needed.

“The general aviation community has always proven ready, willing, and able to help people in crisis, and since last week’s earthquake in Haiti, it has been uplifting to see the outpouring of support for efforts to help those impacted by the crisis,” said NBAA President Ed Bolen. “NBAA has been pleased to partner with AOPA in promoting an online asset registry to gather information about general aviation assets from across the industry that are in position to help with the Haiti relief effort.”

Meanwhile, AOPA Airport Support Network volunteers in southern Florida report that their airports are serving as staging grounds for loading supplies that will be transported to Haiti. Fort Pierce, Saint Lucie County International (FPR) is abuzz, according to ASN volunteer Dick Sinnott, who said that Missionary Flights International is basing out of the airport. DC-7 cargo aircraft are flying supplies to Haiti from Opa Locka, according to ASN volunteer Joe Natoli.