Get the app Get the app
Already a member? Please login below for an enhanced experience. Not a member? Join today
News & Media AOPA at AERO Friedrichshafen 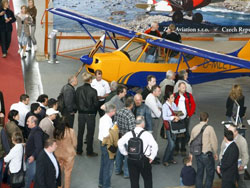 This year’s AERO Friedrichshafen trade show and aircraft exhibit will feature a new level of participation by AOPA and its international organization—the International Council of Aircraft Owner and Pilot Associations (IAOPA).

Held from April 8 through 11 at Friedrichshafen (in the extreme south of Germany on the shore of Lake Constance), the AERO show continues to grow in popularity as Europe’s largest general aviation-only event. On display will be a range of aircraft—from very light jets to light sport aircraft to sailplanes and motorgliders, plus everything in between. A special emphasis is placed on alternative powerplants and fuels, so the show has the kind of eclectic flavor that’s hard to find in the United States.

This year’s AERO will feature an expanded IAOPA presence, to include presentations on current and future European aviation issues. Special emphasis will be placed on IAOPA’s initiatives aimed at reducing the costs of flying and aviation maintenance, and providing information on the instrument rating’s significance in European airspace.

AOPA and IAOPA President Craig Fuller will attend AERO, and speak at the opening reception. Fuller also will address policy trends and issues in several presentations at IAOPA’s expanded booth area, and at seminars with other key participants.