Get the app Get the app
Already a member? Please login below for an enhanced experience. Not a member? Join today
News & Media Flying the PiperSport

Editor’s note: Piper Aircraft kicked off the U.S. Sport Aviation Expo in Sebring, Fla., on Jan. 21 with an announcement that it is importing and rebranding the Czech Sport Aircraft Sport Cruiser as Piper’s entry into the light sport aircraft market. AOPA Pilot Senior Editor Dave Hirschman had the chance to fly the new PiperSport and filed this report. See the news story >> 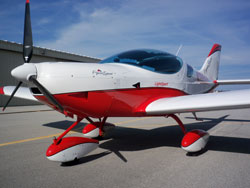 The first thing that strikes you about the PiperSport is its sleek, streamlined appearance. From its beefy, free-castering nose wheel to the pointy tip of its rudder, the airplane is made of metal and held together with pop rivets.

Czech Sport Aircraft has been building Sport Cruisers since 2006, and the metal work is flawless, as you’d expect from the metalworking masters in the Czech Republic who, for decades, have turned aluminum into flying works of art ranging from Blanik gliders to Aero Vodochody jets (such as L-39s).

Piper has rebranded the Sport Cruiser as the PiperSport in an effort to break into the light sport aircraft market with a ready-for-primetime airframe that has floundered in the marketplace for what the Vero Beach company says, diplomatically, are other-than-airplane-related issues. With Piper’s dealership network, credibility, and staying power, the company expects the PiperSport to compete with LSA market leaders Cessna, Remos, and others.

The PiperSport’s front-hinged, bubble canopy offers easy, over-wing access to the cockpit—and sturdy handgrips on the glareshield and a metal post between the two seats make it possible to climb in without stepping on the seat cushions.

The PiperSport has a baggage area behind the seats that can accommodate up to 40 pounds. It also has a pair of wing lockers that can store up to 88 pounds. That’s not bad by small airplane standards—and downright voluminous in the LSA world.

The PiperSport is also generous in the fuel department, carrying up to 30 gallons in a pair of 15-gallon wing tanks. The airplane’s endurance is far longer than just about anyone cares to sit behind a Rotax 912 ULS, a fuel-sipping 100-horsepower engine that typically burns about five gallons an hour in cruise. The propeller is a three-blade, ground-adjustable Woodcomp model, also made in the Czech Republic.

Piper plans to offer at least three versions of the PiperSport: a base model with minimal instrumentation; another with a Dynon EFIS and engine monitor, and a Garmin GPSMAP 496 in the center, and third model that adds a Dynon autopilot. (All will have 12-volt electrical systems.)

The preflight is standard. Drain fuel from three sumps, one from each wing tank and the firewall-mounted gascolator. Move the control surfaces, all except for the rudder actuated by pushrods. Pull the propeller through until the Rotax “burps” (a sound that in actual fact is more like a toilet flushing), then check the oil and engine coolant.
Board from a step behind the wing, settle into the 46.5-inch-wide cockpit, and latch the four-point harness.

Piper Chief Pilot Bart Jones left the canopy open during the engine start—a move prompted by both the warm Florida sunshine and the rugged construction of the canopy and its airframe attachments. 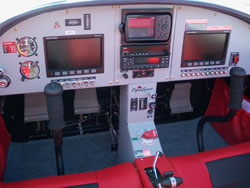 We taxied (with the canopy down) to Sebring’s Runway 18, ran up the engine, and launched southbound. Acceleration seems unusually brisk for such a diminutive airframe and powerplant, and the PiperSport reached its 45-knot rotation speed in about 300 feet. The rudder has plenty of authority, and tracking the centerline is a simple matter.

Even though I’d been warned that the PiperSport is light in pitch, I still managed to over-rotate on takeoff. Yeah, it’s light in pitch, and the elevator works really well, too—even at just 45 knots.

Best rate of climb is 65 knots, and the rate is impressive: about 1,000 feet per minute and a 12-degree deck angle with two FAA-standard-size adults aboard (and almost full tanks on an 80-degree F day).

The field of view is exceptional as you’d expect for an airplane with a bubble canopy. But even the downward visibility is better than other low-wing aircraft because the seating position allows occupants to peer slightly forward of the leading edge.

The flight controls are lighter in pitch than roll—but not twitchy in either. And the forces seem to vary little from stall speed to high cruise. Four buttons on the joystick electrically adjust elevator and aileron trim.

The prop pitch was set so that the engine reached its 5,500 rpm continuous operating limitation just before the PiperSport arrives at the LSA category’s maximum 120-KIAS level-flight speed.

Power-off stalls are preceded by what seems like an unusually prolonged (and hard to ignore) airframe buffeting followed by a crisp break at about 42 KIAS. With the flaps down, there’s some buffeting before the break, but not nearly as much. Slow flight at 50 KIAS is rock solid with 30-degree bank angles. (The PiperSport is placarded against intentional spins and aerobatics.) 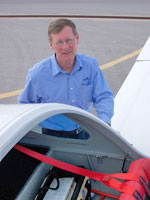 The electric flaps (controlled by a rocker switch on the instrument panel) can be deployed up to 75 KIAS, and the downward pitching moment is minimal. We flew final approach at 60 KIAS and slowed to 50 KIAS over the threshold, and the airplane’s behavior was both conventional and obedient.

The wind was nearly calm during our flight, but Jones said the PiperSport flies well on blustery days, too.

“It’s not at all toy-like,” he said. “It’s a solid airplane that flies well and is extremely conventional in design and construction. That’s something our customers are going to like about it.”

Piper intends to make the airplane a staple for flight schools as well as an enjoyable alternative for seasoned pilots looking for a capable, nice-handling aircraft with low operational costs.

“The PiperSport isn’t toy-like,” Jones said. “It’s a real airplane, and it flies like a Piper. I have no trouble envisioning our Meridian or Mirage owners buying a PiperSport for fun flying. And after all, isn’t fun the reason we all started flying in the first place?”