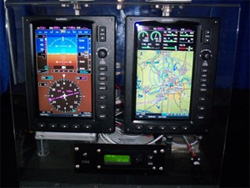 The big avionics news at last year’s U.S. Sport Aviation Expo was Garmin’s introduction of the G3X, a one- or two-screen PFD/MFD suite for Experimental and light sport aircraft owners. This year, in an echo of that announcement, Garmin added an engine information system (EIS) to the G3X that allows the all-in-one system to graphically depict engine rpm, manifold pressure, oil pressure and temperature, cylinder head temperature, and other data. The EIS is designed for aircraft with Continental, Lycoming, Jabiru, and Rotax engines.

Current G3X owners will be able to download free software from Garmin to get the upgrade and purchase sensors kits for their engines. The sensors will be priced at $500 to $800 for Rotax and Jabiru engines and $850 to $1,200 for four- and six-cylinder Continental and Lycoming engines.

Industry officials have long speculated that Garmin would offer Synthetic Vision Technology (SVT) for the G3X—but Tim Casey, a Garmin sales manager, was quick to dispel that notion.

Garmin also revealed it’s working with TruTrak on an upgraded autopilot for the G3X. The non-TSO “GX” autopilot will be based on the same logic and have many of the same capabilities as Garmin’s high-end GFC 700 found in FAA-certified, G1000 avionics systems.