Get the app Get the app
Get the latest news on coronavirus impacts on general aviation, including what AOPA is doing to protect GA, event cancellations, advice for pilots to protect themselves, and more. Read More
Already a member? Please login below for an enhanced experience. Not a member? Join today
News & Videos Light sport brute 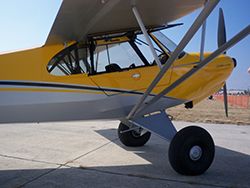 When the air traffic controller requested that the Carbon Cub SS make an “immediate departure,” the airplane didn’t just comply: It redefined the term.

The 180-horsepower light sport aircraft (LSA) leapt off the ground in about four airplane lengths carrying two people and more than 20 gallons of fuel skyward at 1,700 feet per minute and 60 MIAS. Built by CubCrafters in Yakima, Wash., the carbon-fiber rocket ship proves that LSAs don’t have to be boring. They can offer stellar, pulse-quickening performance.

“This airplane will be ready to fly by the time you get the throttle all the way forward,” Chris Cater, a CubCrafters dealer from Michigan had said just prior to our demo flight at the U.S. Sport Aviation Expo in Sebring, Fla. “With a light load, it’s off the ground in three airplane lengths.”

In an LSA category dominated by European, composite, Rotax-powered aircraft, the Carbon Cub SS is an American-built, fabric-covered, Lycoming-propelled anachronism. Its outward appearance bears a strong resemblance to the Super Cubs first built in the late 1940s. But its design and construction have been changed so thoroughly with expanded dimensions, fewer parts, new materials, and modern engine technology that the Carbon Cub SS is categorized as an entirely different airplane.

CubCrafers sells the Carbon Cub SS as both a factory-built S-LSA and a kit E-LSA. The Carbon Cub SS is powered by a four-cylinder, 340-cubic-inch Lycoming engine with dual electronic ignition that produces up to 180 horsepower. The cockpit is 30 inches wide at the pilot’s shoulders (about four inches wider than a Super Cub), the right-side door/window is longer, and the designers make extensive use of lightweight composite materials that put the airplane’s empty weight to 900 pounds—about 250 pounds less than a standard Super Cub. (Like all LSAs, the Carbon Cub SS's gross weight is 1,320 pounds, giving it a 420-pound useful load.)

CubCrafters has tested the Carbon Cub SS far beyond the ASTM standards required for LSAs by subjecting their airplane to FAA Part 23 load tests at weights as much as 40 percent beyond LSA limits. 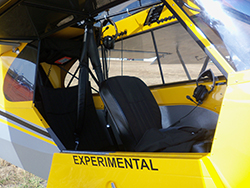 The Carbon Cub SS I flew was equipped with balloon-like tundra tires meant for soft and rough surfaces, even though our trip would begin and end on a thoroughly civilized concrete runway for city slickers: Sebring’s Runway 36.

Engine start was standard Lycoming, and taxi was normal for tailwheel airplanes with toe brakes—although the forward visibility was so good that only slight S-turning was required.

Engine run-up was a bit unusual in that the customary magneto drop was absent. Moving the key switch between left, right, and both, electronic ignitions produced no reduction in engine rpm. Instead, a pair of red lights on the instrument panel alternately showed that one ignition, or the other, was off.

Electric elevator trim is controlled via a rocker switch on the joystick. There’s no trim indicator in the cockpit, so the pilot must look outside at the elevator before takeoff to confirm the tab is set in the neutral position.

Fuel is stored in a pair of 12-gallon wing tanks, and the quantity is read directly through clear sight gauges in each wing root. The fuel selector allows the pilot to drain from the left, right, or both tanks at the same time.

The flap handle is hinged near the upper left wing root, and moving it requires depressing a trigger-like mechanism. We used the first notch of flaps for a short-field takeoff—and the rapid acceleration and short ground roll were truly breathtaking. The Carbon Cub SS seemed contemptuous of gravity and wanted nothing more to do with terra firma.

The semi-reclined seating position when the airplane is on the ground with a high deck angle becomes more upright in level flight, and the seat itself is extremely comfortable. The instrument panel is both lower and moved four inches forward from the Super Cub’s, and visibility over the nose in flight is excellent. The wings block a significant portion of the pilot’s field of view in steep turns, however, so it’s a good practice to lift a wing and check for traffic before starting steep turns.

Elevator and aileron forces are well balanced with little adverse yaw. Rudder forces are surprisingly heavy, both on the ground and in the air, but not disagreeable.

The Carbon Cub SS’s pilot operating handbook allows full power to be used up to five minutes in takeoff and climb and limits pilots to just 80 horsepower in cruise flight. The manufacturer relies on the honor system for compliance, however, and there’s nothing about the engine or airframe to prevent pilots from flying at higher power settings (and greater speeds) than the POH dictates. The Super Sport Cub is limited to the LSA maximum 120 KIAS in level flight—and the tundra tires on the aircraft I flew were terrific speed brakes. At 2,500 engine and propeller rpm, the aircraft showed no inclination to go beyond that limit in level flight.

Stalls were benign affairs that took place at an absurdly slow 32 MIAS and fell below 30 MIAS with flaps. They’re preceded by mild aerodynamic buffeting about three knots before the break. Ailerons are crisp and effective even after the stall break, and recovery is standard.

Back in the traffic pattern at Sebring, we flew the pattern at 70 MIAS, about 20 miles per hour faster than normal, to fit in with a long string of GA arrivals, and we aimed to land long so as to touch down close to a runway turnoff. A three-point landing in a 10-knot crosswind resulted in a ridiculously short landing roll, and even though we had touched down less than 200 feet from the runway turnoff, we could have halved that distance and still exited with ease.

The Carbon Cub SS is an exciting and versatile aircraft that would seem at home in the rugged back country as well as more urban Saturday morning pancake outings. It has exceptional short-field and climb capabilities, and good cross-country performance with speed and economy that compare favorably to Super Cubs. The LSA category’s payload restrictions limit the Carbon Cub SS’s payload, however, to far less than traditional Super Cubs are allowed to carry.

A high-lift airfoil and a powerful engine with variable ignition timing (instead of fixed-timing magnetos) give the Carbon Cub SS big advantages in hot-and-high conditions where high-density altitudes degrade aircraft performance. Anecdotal information suggests the Carbon Cub SS is capable of climbing well into the flight levels. LSAs are limited by regulation to 10,000 feet and below, but it will be interesting to see what individual builders do with Carbon Cub SS built under Experimental licenses. It’s easy to envision clipped-wing versions, constant speed props, and IFR instrumentation.

The LSA category caps such things as gross weight, stall speed, and top speed. But the Carbon Cub SS shows that there’s no limit on innovation or excitement.