Get the app Get the app
AOPA will be closing at 1:45pm ET on Tuesday, December 6th. We will reopen Wednesday morning at 8:30am ET.
AOPA Members DO more LEARN more SAVE more - Get MORE out of being a pilot - CLICK HERE
News & Media Cirrus updates customers on Vision Jet 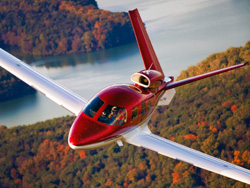 Cirrus Aircraft officials say the company’s financial strength has improved to the point that it is capable of attracting development capital to fund completion of the Vision Jet. For now, development is being funded with internal cash flow and will concentrate on design issues.

Dale Klapmeier, co-founder and chairman of the company, said he was looking forward to “an exciting few years ahead of us.” CEO Brent Wouters said company debt is down 12 percent while inventory is down 75 percent. That is an improvement over 2008 and 2009 when the company was in “survival” mode, Wouters said. The company has increased its market share of single-piston-engine aircraft, and resale values of SR20 and SR22 aircraft “have climbed appreciably,” Wouters said.

With fewer dollars focused on the jet until outside financing is found, spending is focused on lower-cost elements such as design. The design program for 2010 will move the program ahead “appreciably,” Wouters said.

As of Jan. 1, the price of the Vision Jet is $1.72 million. “We will get the program done as soon as humanly possible,” Wouters said, although he doesn’t know when that will be.

Vision Jet Sales Director Gary Black said 80 percent of customers are SR22 owners, while 10 percent are owners of high-performance aircraft. There were no details at the most recent briefing on experience and training requirements for owners that will be required by insurance companies. Black said owners in waiting could pile up Cirrus SR22 Turbo time as one method of preparation, and that knowledge of its Cirrus Perspective avionics—based on the Garmin G1000—will be required to earn the type rating. Pilots will need to know the system cold, Black said. Avionics in the Vision Jet will be based on the Garmin G3000, which is similar.

Black said he tracked Cessna Mustang usage, and found most flights covered 350 nm at 28,000 feet. The Vision Jet will be able to do that as well. Its cabin altitude will be 8,000 feet at the maximum altitude of Flight Level 280, an increase from the previously announced maximum altitude of FL250. The aircraft will have an airframe recovery parachute and will be approved for flight in known icing. It uses newly developed silver urethane deicing boots. The aircraft now has 395 hours on the engine including ground tests, and 236 flight hours. Additional flight hours will accrue from a sales and demonstration tour planned during February in the Southwest and West.

The approach speed of the jet is 85 knots. Little performance data is available, but during AOPA Aviation Summit in Tampa, Fla., the Vision Jet landed in 1,400 feet and took off from a 3,000-foot runway in 2,500 feet.