Get the app Get the app
Already a member? Please login below for an enhanced experience. Not a member? Join today
News & Media PS Engineering debuts audio panel for experimental, LSAs 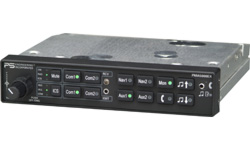 PS Engineering is expanding its line of audio panels for experimental aircraft and light sport aircraft with its new PMA5000EX. The audio panel sits squarely in the middle of the company’s offerings, bridging the gap between high-end features and low cost.

The PMA5000EX includes IntelliVOX, the company’s automatic squelch system. It also has a four-place intercom, and supports two communication radios, two navigation radios, and two auxiliary connections for things such as alarms. The unit also has a front-mounted jack for music connection, cell phones, and other devices. Finally, the unit offers the capability to split the communications between front and rear seat passengers, as well as muting functions for each.

PS Engineering said that by eliminating the need for certification, and the cost of a marker beacon receiver, it is able to offer the PMA5000EX for $995. The new unit will be available beginning in early February.