Get the app Get the app
Already a member? Please login below for an enhanced experience. Not a member? Join today
News & Media Answers for Pilots: Cheer Up!

Answers for Pilots: Cheer Up! 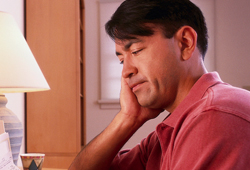 American Country music singer Gary Allan had a hit single in 2006 with his song, “Life Ain’t Always Beautiful.” Most of us who’ve lived awhile have gone through some turbulent times—relationships gone sour, a loved one’s illness or death, or a really bad financial break. We get knocked down, shake it off, and get up to carry on, again. But, as Allan so simply puts it in one of his song’s stanzas, “Sometimes it’s just plain hard.”

If you mention a life-crisis to a physician, he or she usually suggests you consider taking an antidepressant to help you cope with it. While thousands of non-pilots have found some help working through their tough times by taking prescribed antidepressants, pilots could not without invalidating their airman medical certificates, since the FAA had not (until recently) allowed  the use of any antidepressants for any condition.

But now, it’s a different story. For several years, AOPA has advocated for allowing pilots with conditions well-controlled by certain types of antidepressants to fly. It took FAA a long time to agree with us—but after conducting an extensive review of literature assessing the risks and benefits of antidepressant usage; and evaluating the experiences of Transport Canada and the Civil Aviation Safety Authority in Australia (both of which have allowed antidepressant use in the cockpit for years), reviewing the recommendations from AOPA and other aviation organizations, and undertaking a multi-year evaluation and a very interesting debate among civil aviation medical certification specialists —the FAA has finally come around.

As an AOPA member, you can take advantage of the expertise of AOPA’s Medical Certification Specialists, who talk with thousands of pilots about medical issues every day, and help guide many of them through the FAA’s special issuance process. The AOPA Medical Services Program has two levels, Essential and Comprehensive.

AOPA’s Essential Medical Services Program costs just $37, while the Comprehensive Program is offered for $99. Enroll online today or call AOPA to enroll over the phone, 800-USA-AOPA (872-2672).

FAA announced that, effective April 5, 2010, it will consider individuals for special issuance medical certification who are being treated for depression with one of four specific antidepressant medications. All classes of medical certification will be considered, but individuals who are granted a special-issuance medical certificate under this policy may take only one type of antidepressant medication limited to the following four medications:  Fluoxetine (Prozac), Sertraline (Zoloft), Citalopram (Celexa), or Escitalopram (Lexapro).  All of these medications are SSRIs—Selective Serotonin Reuptake Inhibitors—antidepressants that help restore the balance of serotonin, a naturally occurring chemical substance found in the brain. While the focus of FAA’s policy statement is on individuals being treated for depression, FAA realizes that these four medications may be used to treat conditions other than depression. Because of this, applicants will be considered on a case-by-case basis under the special-issuance process. There’s a lot more to know about this and AOPA has detailed information online.

FAA believes that many pilots have taken, or are taking, prescribed antidepressants, but did not report them when they renewed their airman medical certification. This is falsification of a federal document and, if prosecuted, carries serious penalties. So, FAA has established a period of immunity from prosecution, which ends Sept. 30, during which pilots who failed to disclose their antidepressant use on past medical applications can fess up without fear of prosecution.

According to a bulletin from the FAA Chief Counsel, the FAA will not initiate legal enforcement action against a pilot regarding past medical applications if the applicant discloses a history of antidepressant use, the underlying condition for which the medication was prescribed, and visits to health professionals in connection with the antidepressant use or the underlying condition.

Here’s what you need to do to benefit from the protections of the bulletin:

Although coming forward during the amnesty period will prevent prosecution, it does not guarantee that you will return to the air. The FAA considers special issuance certificates on a case-by-case basis; and it’s possible you won’t meet the qualifications for a special issuance medical certificate on the basis of your most recent application. Want some guidance? Here’s where AOPA’s Medical Services Program can help.