Get the app Get the app
Already a member? Please login below for an enhanced experience. Not a member? Join today
News & Media Cirrus SR22T

The new Cirrus SR22T is the most obvious response to date by an aircraft manufacturer to the concerns of potential new aircraft buyers about the future of leaded avgas. Officials at Teledyne Continental Motors say the new -K model of the TSIO-550 engine on the SR22T gives Cirrus buyers a path to a lead-free future. 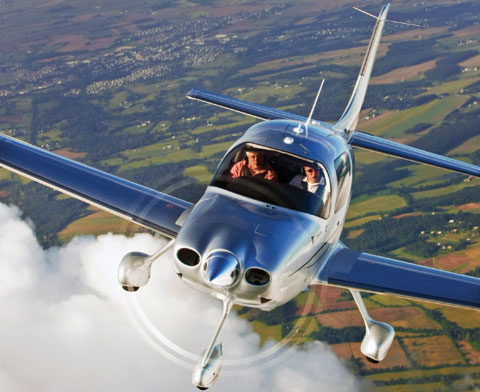 The new Cirrus SR22T is the most obvious response to date by an aircraft manufacturer to the concerns of potential new aircraft buyers about the future of leaded avgas. Officials at Teledyne Continental Motors say the new -K model of the TSIO-550 engine on the SR22T gives Cirrus buyers a path to a lead-free future. With leaded avgas certain to disappear over the next 10 years or so, many pilots have been asking why they should plunk down big bucks for a new airplane that may not be able to make the leap to an unleaded fuel—whatever that fuel may be. Different engine manufacturers have different opinions on how the future might shape up, but the one thing they have in common is that they are all hustling to find a solution—ideally one that is transparent to today’s engines or, worst case, one that only shaves a few percent of performance off the charts when octane levels drop with the removal of lead from the fuel.

TCM is working aggressively to have most of its product line approved to run on 94UL, which is basically today’s 100LL avgas without the lead additive. Most people involved in developing the fuel transition plans agree that 94 octane is about the lowest that we should expect for an overall solution. Some new fuels in testing show promise of offering 100 octane or even more, which would be ideal—but each of those fuel options is years away from full-scale certification and production.

So what’s an aircraft manufacturer to do to convince concerned buyers to keep buying? Promise a solution that meets the worst-case scenario: 94UL. 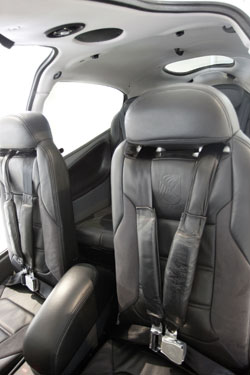 The engines most adversely affected by lower-octane fuel are those with high-compression cylinders, such as the IO-550N in the current-generation Cirrus SR22. The cylinders in those engines operate at a compression ratio of 8.5 to 1, meaning that when the piston is at the bottom of its stroke, the volume of air in the cylinder and combustion chamber is 8.5 times greater than when the piston is at the top of its stroke. High-compression engines extract maximum efficiency out of each gallon of fuel, but they also are most sensitive to decreases in octane. The correct octane level keeps the engine from suffering from detonation, or “knocking,” which can be destructive if left unchecked.

To help future-proof the new turbocharged engine for Cirrus, TCM developed the TSIO-550K, which uses lower-compression cylinders operating at a ratio of 7.5:1. According to TCM, the change will allow the engine to operate safely with only a minimal reduction in performance should our next generation of unleaded avgas be only 94 octane. How much of a reduction? About 2 percent in cruise, says Cirrus, although TCM’s engineers suggest a slightly greater decrease.

The -K engine uses lower-compression cylinders, but it’s no slacker in power. Leveraging its dual turbochargers and intercoolers, the engine pumps out 315 horsepower at just 2,500 rpm, compared to 310 horsepower at 2,700 rpm for the normally aspirated IO-550 on the SR22. Both have recommended times between overhauls of 2,000 hours. That reduction in rpm reduces noise inside and out. What’s so remarkable about the addition of a turbocharger to the Cirrus SR22 is that it is so unremarkable, at least from an operational standpoint. Unlike fussy fixed and manually controlled wastegates of yesteryear, and cooling concerns from fire-breathing turbos, the SR22T runs easy and cool—and fast. The addition of the turbocharger boosts maximum cruise speeds to 214 knots, compared to 180 knots for the typical normally aspirated SR22.

The T is for take it easy

Operationally, if you like a lot of machinations in the cockpit and enjoy finessing numerous levers and knobs to run the engine, you’ll be disappointed in the SR22T. The -K starts like any TCM engine. With Cirrus Marketing Senior Analyst Matthew Bergwall in the right seat, I was pleased to feel how smoothly the throttle advances without the detent found in other Cirrus models. Sliding the throttle past the detent fully engages the prop governor and drives rpm to 2,700 in those models. The SR22T model has the propeller permanently limited to 2,500 rpm anytime the propeller governor is engaged.

With the engine showing just over 100 percent power and manifold pressure at its maximum 36.5 inches, the airplane accelerated down the runway, rotating at 70 knots. I didn’t touch the throttle again until we leveled off at 16,000 feet, climbing at about 1,000 fpm the entire time while flying at 130 knots indicated airspeed. Passing through 12,000 feet, a chime and annunciator on the Garmin Perspective panel reminded us to put on oxygen cannulas. At 16,000 feet, I pulled the throttle back until the engine gauges displayed on the panel showed 80 percent power, a common setting for turbocharged airplanes. I pulled the mixture back until the fuel flow matched the blue triangle on the fuel flow gauge—the triangle representing the fuel flow for lean-of-peak operations; best economy in pilot operating handbook (POH) parlance. The flow dropped from an impressive 37 gallons per hour in the climb to 17.6 gph in cruise. It’s that simple. No charts to consult, buttons to push, or graphs to interpret. The speed settled in at 192 KTAS, about on book considering that it was about 14 degrees warmer than standard that day. The hottest cylinder head temperature was 390 degrees F and turbine inlet temperature was 1,680 degrees F.

Bergwall says the two NACA ducts on each lower side of the cowling improve induction airflow for the turbochargers, helping to manage temperatures. In addition, slightly larger cooling inlets compared to other SR22s improve cooling, as do larger openings for the exhaust pipes and additional louvers on the bottom of the cowl. A new engine mount system reduces vibration in the cabin.

Cirrus has offered a turbonormalized SR22 for several years, delivering more than 900 Smart Turbo TN SR22s. Tornado Alley Turbo (TAT) in Ada, Oklahoma, developed the turbonormalizing system. When the kit proved popular in the aftermarket, Cirrus began offering it at the factory. 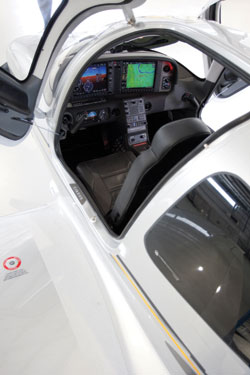 Whether turbonormalized or turbocharged, an automatic controller manages the wastegate, which controls the amount of boost provided by the turbo system, keeping the pilot-selected manifold pressure throughout the climb or descent. Set maximum power at takeoff, and the wastegate controller automatically maintains it all the way up.

Cirrus plans to continue offering the TN SR22. Both models are priced at $535,000 for a well-equipped airplane and weight is nearly identical. Engine warranties are also essentially identical. So, which do you choose?

George Braly, chief engineer and cofounder of TAT, believes his turbonormalizing system is more efficient than the TCM solution. In his typical, don’t-mince-words approach, Braly commented, “Tornado Alley Turbo will guarantee in writing that the TN SR22 Smart Turbo will run cooler, on less fuel, and at a lower operating cost than the TCM SR22T—and faster. We will back that promise up in writing. If you can get the same offer in writing from TCM, you might consider the TCM engine as a viable alternative.”

Like some others involved in the next-generation avgas debate, Braly doesn’t believe that 94UL is an acceptable solution. Another of Braly’s companies has developed an unleaded fuel that he believes can be a drop-in substitute for 100LL (see “ Look, Ma, No Lead,” May 2010 AOPA Pilot). His G100UL fuel provides the 100 octane that high-compression engines need, obviating the need for TCM’s lower-compression cylinders on the -K engine, according to Braly.

In order for an engine such as the -K model to run on 94UL at high power settings normally used by turbo engines (often as much as 85 percent in cruise), the timing of the spark plug firing would need to be adjusted to about 20 degrees before top dead center, compared to the more typical 24 degrees BTDC in a current TSIO-550-series engine now operating on 100LL, Braly said. The change would be necessary to prevent detonation because of the lower octane. As a result of the change, exhaust gas and turbine inlet temperatures would rise significantly. According to Braly, these high exhaust and TIT temperatures will only be “managed” by imposing operating limitations that current pilots of high-performance aircraft will find unacceptable. In addition, says Braly, such temperatures will reduce the longevity of the exhaust system and increase maintenance requirements. He adds, “The combination of the loss in efficiency and the operating limitations will seriously degrade the engine’s performance on a day-to-day basis while running a lower-octane fuel.” 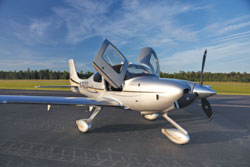 Engineers at TCM disagree with Braly’s assessment. They say the -K engine will run on 94UL without any change to magneto timing. Chip McClellan, TCM’s director of engineering for projects involving aircraft manufacturers, said that the engine’s maximum rated cruise setting will likely need to be reduced to provide sufficiently wide detonation margins. An engine’s maximum rated cruise setting is the maximum power it can produce while leaving room for normal leaning procedures. In the case of the -K engine running on 100LL, that rating is about 85 percent power. Running on 94UL, the rating might be closer to 75 percent power. Final testing to determine the actual rating was still under way at press time. According to the SR22T POH, all else being equal, a reduction from 85 percent to 75 percent power would decrease maximum cruise from about 214 knots to about 203 knots. McClellan explained that because takeoffs and climbs are made with the mixture full rich—providing maximum detonation margins—there would be no reduction in performance in those phases of flight. He also said that a -K engine running on 94UL would experience only a “negligible” increase in exhaust gas temperatures and no change in CHTs compared to a 100LL-burning engine.

Regarding Braly’s claim that his TN-modified airplanes are faster, that depends on how you measure it. According to the POH for each model—and assuming 100LL fuel—at 85 percent power, the TCM version cruises at 196 KTAS on 18.3 gph versus 193 KTAS on 17.6 gph for the TN Smart Turbo package. Interpolating POH data, it appears as though if the TCM airplane was leaned to the same fuel flow as the TN airplane, the TN airplane would likely be slightly faster.

We did not have the chance to fly both airplanes side by side, but we have flown each separately at various times. The truth is that POHs rarely represent reality and in reality, the two airplanes are very close in performance.

Braly’s claim that the TN airplanes will experience lower operating costs over time may have merit. According to TCM, the price of a factory-remanufactured TSIO-550K engine will be approximately $56,000, whereas the equivalent price for an IO-550N used on the turbonormalized airplanes is $33,000. Add Tornado Alley’s costs for overhauling the turbonormalizing system and the price climbs to between $46,000 and $49,000, about $7,000 to $10,000 less than the TCM solution.

The new offering from Cirrus gives the consumer choice, which is always desirable. Deciding which to choose, however, will be challenging. With nearly 1,000 TN airplanes in the field, reliability and overhaul costs are known. Reliability and overhaul costs for the -K engine won’t be known for some time. In either case, with the SR22’s flight into known icing system, automatic climate control system, and the impressive Garmin Perspective panel, customers will be flying a fast, comfortable, efficient airplane that represents the latest that general aviation has to offer in fixed-gear singles.