You probably haven’t heard of the “Empty Quarter,” and that’s why paraglider pilot and freelance author and photographer George Steinmetz traveled there. The Empty Quarter is one of the most remote deserts on Earth and includes portions of Oman, Yemen, Saudi Arabia, and the United Arab Emirates. 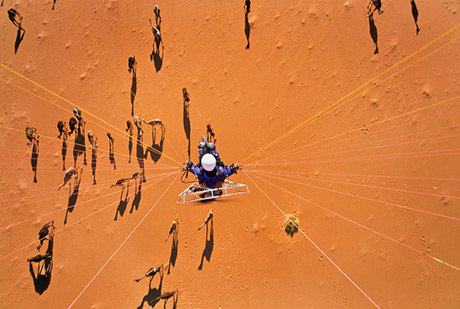 You probably haven’t heard of the “Empty Quarter,” and that’s why paraglider pilot and freelance author and photographer George Steinmetz traveled there. The Empty Quarter is one of the most remote deserts on Earth and includes portions of Oman, Yemen, Saudi Arabia, and the United Arab Emirates. It has been crossed only a handful of times. Arms smugglers know it well.

The result of several trips by the National Geographic and Geo contributor is a coffeetable book of photographs called Empty Quarter that were taken by him from a 30-mph paraglider. He has also written African Air based on 10 years of paraglider flights above several countries in Africa.

“The flying for me is a little hectic, as I have to pilot while I take pictures,” Steinmetz says on his website. “I’ve had my share of mishaps, like landing in the ocean while photographing whales, or getting dragged across a dry lake in a sandstorm, but generally speaking, if I had used any other kind of aircraft than this for what I’ve been doing, I probably wouldn’t be alive today.

“I have a firm rule never to fly over an area where I can’t make an emergency landing,” he said. “This means no large forests, big cities, volcanic rocks, or large expanses of water without a safety boat.” 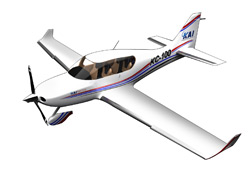 Korea Aerospace Industries (KAI) will fly its single-engine KC-100 piston-engine aircraft soon in preparation for entering the market in 2013. The four-passenger aircraft, claimed to fly at 240 KTAS (maximum speed), went undiscovered until Hartzell announced it was building a propeller for it. The aircraft uses a three-blade Hartzell composite propeller on a Continental TSIOF-550 engine with full authority digital engine control (FADEC), rated at 315 horsepower at 2,500 rpm.

Development of the KC-100 began in 2008. Certification will be accomplished by both the FAA and EASA in Europe. Hartzell has previously collaborated with the diverse company on a turboprop military trainer. KAI also makes satellites, helicopters, and jets, so a single-engine general aviation airplane is well within the company’s capabilities. The aircraft has an all-composite exterior. Its specifications include a maximum takeoff weight of 3,600 pounds, a maximum payload of 1,100 pounds, and a maximum range of 1,321 nm. Although the company used the term “payload,” there was no information on whether that is instead the useful load (before full fuel is subtracted). Anti-icing equipment will also be included for a total installed weight of 63 pounds. A diagram on the company’s website (koreaaero.com) indicates it will have a collision warning system, but there is no mention of an airframe parachute.

Mike Disbrow, Hartzell’s senior vice president of marketing and customer services, said the KC-100 prop is expected to be delivered in July. 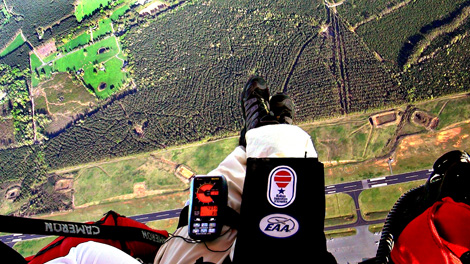 Cluster ballooning became infamous on July 2, 1982, when the late Larry Walters—subsequently dubbed Lawn Chair Larry by some—soared to 16,000 feet in busy Los Angeles airspace. The FAA fined him $1,500 for having an uncertificated Sears lawn chair and for operating in Long Beach airspace without contacting the tower.

Today, 28 years later, there are two pilots certificated to fly cluster balloons. Jonathan R. Trappe of Raleigh, North Carolina, is one of them. He’s legal to fly a gas balloon, or in his case, to herd a bunch of gas balloons through the sky.

The lawn chair has been replaced by a carbon fiber cradle. The balloons are the same as those used for advertising.

So, what does the hot-air ballooning community think of it? “Done properly by an experienced aviator, there’s nothing wrong with it,” said Andy Baird, vice president (United States) of Cameron Balloons, builder of the Breitling Orbiter III, the first balloon to fly around the world, and the Spirit of Freedom, the first solo round-the-world balloon flight. “It’s what backpacking is to RVing. It is a minimalist approach to hot-air ballooning,” he said.

Trappe takes as much as 350 pounds of water with him carried in MSR Dromedary bags used by hikers and campers. When he wants to climb, he releases water. When he wants to descend, he can release a balloon, release just the gas in a balloon, or pull down the nearest balloon and knife it to deflation. To land, he’ll release balloons at the treetops and may spend a few minutes “kicking trees.” If the descent rate is too high, he will release more water and usually lands at 50 feet per minute.

“It’s silent, the most pure form of flight there is,” Trappe said.

ForeFlight recently released the first large-scale aviation application for Apple’s highly anticipated iPad. With approach plates, IFR and VFR charts, AOPA Airports information, weather, and the ability to file a flight plan, ForeFlight bills its iPad application as a complete preflight solution. The iPad allows for a large, full-color display of weather and charts, but the downside is that charts must be downloaded prior to departure where a wireless signal is available.

Hilton Software’s WingX is available in a new edition, version 3.6 for the iPhone. It offers a moving map display with terrain awareness that the company says works even without cell or Wi-Fi service. That, along with approach charts, weather, DUATS flight plan filing, an E6B, AOPA Airports information, and an Airport/Facilities Directory, makes WingX a strong competitor and a very useful tool. The company is planning an iPad application that should be out this month. 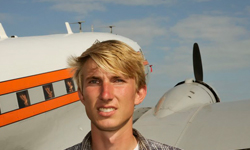 If the Gulf Coast oil leak ever gets plugged, it may be that Glen Moss, 22, and his aviation-legend father, Frank, had something to do with it. They have delivered supplies by Douglas DC-3 since the oil rig exploded in May.

Moss is a first officer on the Douglas DC-4G, the DC-6BF, and the DC-7B, flying for Florida Air Transport, based in the Miami area, and Great Southern Airways, owned by his family and based in Punta Gorda, Florida. His adventures rival those of Harrison Ford’s Indiana Jones character.

His brother, Charlie, also a pilot and member of the family air cargo business, explains how it all started. “Our father is Capt. Frank Moss, who has been involved in aviation since the early 1960s. My brother and I grew up around round engines since we were infants. While growing up, we got to fly with our dad when he was working in Alaska, and later on got to fly occasionally with him around the United States and Caribbean region. As soon as we could, we did our flight training and earned our ratings. Glen pursued them at a much faster pace, while I worked on them during my summers home from”

The family owns a Douglas DC-3 that appeared in the James Bond movie Quantum of Solace, and flew on D-Day.

Moss has flown with his father to deliver emergency cargo in response to the recent Haiti earthquake.

“They have also worked a bit with the entertainment industry,” said Charlie Moss. “Over the years, my dad has flown musical and stage equipment for famous musicians. Lately my brother was co-pilot on Joe Shepherd’s Lockheed 12 [used in the movie, Amelia]. He and Captain Shepherd flew across the country from Georgia to California, because the airplane was going to appear in an advertising campaign. I got to tag along on this amazing adventure!”

Lycoming Engines will appeal an $88.7 million jury verdict in a Philadelphia court regarding a 1999 crash of a Piper Cherokee Six at North Lima, Ohio.

“Lycoming is disappointed with the verdict, particularly given that the NTSB in its investigation of this accident found that the accident and the regrettable loss of life had absolutely nothing to do with Lycoming’s engine. Lycoming will take the necessary legal steps for review in the trial court and pursue an appeal to overturn an unwarranted verdict,” said attorney James Robinson of Cozen O’Connor.

The original NTSB report indicated the aircraft had stopped at Youngstown Elser Metropolitan Airport near North Lima on a flight from Oshkosh, Wisconsin, to Pottstown, Pennsylvania. The crash occurred on departure after refueling and killed four of the five people onboard. The fifth survived and testified that the engine sounded as normal and consistent as it had during the entire trip right up to impact. An eyewitness on the ground told NTSB the engine was heard “roaring” prior to impact. The passenger also described a turn after takeoff that was nose high that coincided with loss of altitude. The aircraft that crashed was built in 1968. Lycoming sold the engine to Piper in 1967.

The attorney representing the plaintiffs was Arthur Alan Wolk, who argued that the aircraft had a defective carburetor, and that Lycoming withheld information on the carburetor from the FAA.

“This verdict is doubly significant because it was decided under the General Aviation Revitalization Act [GARA] of 1994, a federal statute that imposes a statute of repose on lawsuits against aircraft and their component manufacturers 18 years after the product is first sold,” Wolk said.

“This case was decided under one of the exceptions to that statute known as the ‘Knowing Misrepresentation’ exception. That exception requires a claimant to plead and prove that a manufacturer knowingly misrepresented essential information to the FAA that relates to the safety of the product. This jury had no difficulty quickly making such a finding and then holding Lycoming Engines liable for defect, negligence, and conduct justifying the imposition of punitive damages.”

The jury came back 10-1 on the case, finding the product defective, Lycoming Engines negligent, and the conduct meritorious of punitive damages, according to the verdict sheet, Wolk said. It found pilot Lendon Pridgen was not negligent and found Lycoming Engines was 100 percent negligent, he added.

The GARA has been overturned in several cases since it was passed by Congress under the “Knowing Misrepresentation” exception. GARA bars lawsuits against the manufacturer of an aircraft or component part once that item has been in service for 18 years.