Get the app Get the app
AOPA will be closed July 4th, in observance of the Independence Day holiday. We will reopen at 8:30 am ET on Tuesday, July 5.
News & Media Pilots: Lowell Wiley 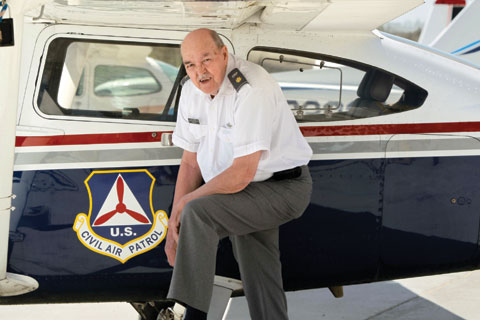 “I feel lucky, blessed, and grateful,” says Lowell Wiley, a private pilot since February 10, 1959, who has logged 20,000 flight hours. His first flight, at age 13, was with his father in a four-place Bellanca in 1949. But it was a couple of flight lessons from his brother Earl Sherman—a Korean War veteran who learned to fly on the G.I. Bill, became a flight instructor, and later worked as a crop dusting and corporate pilot—that left him hooked.

“I feel I was well trained,” said Wiley. “I feel it was providential, perhaps, that I also flew with Morton Fitzpatrick, an ex-B–47 jet bomber pilot who probably contributed to saving my life more than one time.”

Wiley recalls the time, while stationed at Little Rock Air Force Base in Arkansas, when he was flying the Beech T–34 Mentor, which became his favorite airplane. “Perhaps it was the safe landing, and completion of a flight where I lost the use of both my ailerons and elevators that endears me to the T–34 to this very day,” said Wiley. “I had a frozen stick for a half-hour or so because the right aileron was disconnected, and then became lodged into the rear of the control surface slot in the aft of the wing. It was a job then of flying the airplane back to base with rudder, trim, and throttle.”

His success was because of Fitzpatrick. “How can one not love and honor a man who helps to keep him or her alive through 20,000 hours as an aviator?” says Wiley. “Fitz, as we students called him, is gone now to the wild blue yonder, but some little part of him was always flying along with me, and I doubt I ever honored him for it. So let this be my way of saying thanks to a man that made all the difference in the world.”

And Wiley returns the favor by doing for future pilots what “Fitz” did for him.

In 1963, he became an instructor as a way to build flight time and make money. He quickly moved into corporate flying while maintaining his part-time job as a flight instructor.

“Instructing is where the pilot probably learns the most,” said Wiley, who eventually added seaplanes and helicopters to his CFII credentials. “The luckier ones survive and go on to learning even more as they move on to careers that take them into the military or the airlines or crop dusting or corporate flying, like my own career did for me.”

In 1966, Wiley started the Fayette Aero Club in Lexington, Kentucky (now the Lexington Flying Club). He trained pilots in the Cessna 150 and earned the FAA Gold Seal certificate to add to his CFI credentials.

Wiley kept instructing over the intervening years, but has yet to top his favorite and most memorable experiences, which occurred in Hondo, Texas, in the late 1980s and early 1990s when he worked pilot candidates through the U.S. Air Force Flight Screening Program in the T–41.

“I’ve enjoyed watching my students advance in corporate, airline, and military aviation,” he said. “I flew 2,200 hours in the program and soloed dozens of students. Almost all of my students completed the program and moved on to Air Force Undergraduate Pilot Training. Some of my former trainees are now doing exemplary Air Force jobs. I keep up with one or two via the Internet and am proud of my contribution to their fine military careers.”