Get the app Get the app
News & Media Wonderful Wacos

Classics are still made in Michigan - with a new twist

--> The first glimmer of dawn is beginning to lighten the eastern horizon as I lower myself into the Waco YMF-5D at W.K. Kellogg Airport in western Michigan.

The first glimmer of dawn is beginning to lighten the eastern horizon as I lower myself into the Waco YMF-5D at W.K. Kellogg Airport in western Michigan.

Externally, little about the elegant, handcrafted biplanes that Waco Classic Aircraft builds here in Battle Creek seems to have changed since 1930 when the original YMF took shape. But the “D model” is equipped with a new MT wood propeller, a 300-horsepower Jacobs engine (up from 275), LED lights, a more robust electrical system, and a full IFR glass cockpit that would make this airplane seem like a fantasy to those who knew the originals.

Settling into the rear cockpit is like dropping into a leather-lined well. I had familiarized myself with the cockpit layout and plugged in my headset inside a lighted hangar. But now, in the inky darkness, I rummage blindly for the throttle, mixture knob, primer, master switch, key, and starter—all needed to wake up the seven-cylinder engine on this brisk, 37-degree-Fahrenheit morning, the final day of winter. The engine starts without complaint, and the deep, rumbling sounds and sensations of the warming radial are at once calming, invigorating, and full of anticipation.

A few yards away, a candy-apple-red Waco’s fuel-injected Jacobs engine comes to life with blue flames, only visible in the darkness, shooting from the exhaust stacks beneath. Bob Wagner, a Waco factory test pilot, will lead our “dawn patrol” photo flight in the glamorous red airplane, the 121st Waco manufactured in Michigan since production was revived in the mid-1980s. Wagner’s airplane is a flying contradiction: the first biplane ever made with entirely glass-cockpit avionics—including a Garmin G500 and an L-3 Trilogy standby instrument. But it’s not going to be the last as buyers show a clear preference for modern gadgetry, even in old-world biplanes. 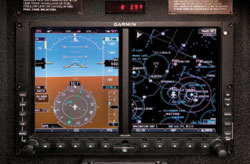 Taxiing for departure on Runway 23, the LED landing light on my airplane’s left wing illuminates the aircraft ahead like a spotlight. The airplane I’m flying, N369AS, is Waco Classic’s testbed—used to prove the many improvements the company has made to the airframes, engines, electrical systems, and instrument panels in recent years.

On the takeoff roll, the 755-cubic-inch engine built and modified by Air Repair of Cleveland, Mississippi, provides an earthquake of acceleration, and the lightly loaded airplane climbs far more energetically and with less vibration than the C-model Wacos I had flown previously. The company claims a 19-percent gain in rate of climb with the modified engine and MT prop—and it’s unknowable without independent tests whether the engine or the prop deserves more credit for the improved performance.

The point is academic by the time we reach the departure end of the runway, however, because my airplane has already caught up to the Cessna 172 photo ship and red Waco, and it’s time to power back to low cruise: 1,900 rpm and 110 mph with a fuel flow of 14 gph.

Despite the cold wind whipping by outside, the roomy cockpit is surprisingly warm. Heat billows up from a pair of outlets by my feet, and I soon discover that I’m overdressed in a quilted winter flight suit. Even before the sun fully crests the horizon, my gloves are off and the flight suit is partially unzipped. Waco Classic pilots fly all winter in Michigan, and they’ve found some tricks for making the experience bearable. A 37-degree morning, for them, is balmy.

I tuck in next to the red Waco (rhymes with “taco”) and admire its curvy, art deco form and graceful, tail-high attitude in flight. Passing over the still- leafless trees, the partially frozen lakes, and the not-yet-planted farm fields, the airplane ahead is revealed for what it is: a timeless, hand-made work of art.

Waco Classic President Peter Bowers bought the company in 2008 before he had ever flown one of the distinctive airplanes. “I’d been to the factory and was fascinated and amazed at the quality of the work that went into each of these airplanes,” said Bowers, 42. “I had been a private pilot for about 12 years, and I’d heard through the grapevine that the business might be for sale. I made an offer, and we reached a deal in June 2008.”

Bowers had been the plant manager at a Michigan manufacturing firm before buying Waco Classic, and he takes an active, hands-on approach to running the 25-employee company. Interestingly, a sizeable portion of the down payment came from Garmin stock that Bowers had purchased when the Kansas firm first went public, and sold near its peak.

“It was a good investment for me at the time,” he said. “And I’m returning the favor as an exclusive Garmin customer.”

About 75 percent of the company’s revenue comes from new aircraft sales and replacement parts at Waco Classic. (New Waco YMF-5D biplanes range in price from $395,000 to $495,000.) A sister firm, Centennial Aircraft Services in a next-door hangar, maintains and restores a wide variety of aircraft and specializes in vintage airplanes; it accounts for the other 25 percent of revenue.

Bowers’ goal for Waco Classic is to build and sell eight new airplanes a year. “Ideally, we’ll produce one new aircraft every six weeks,” he said. “Last year was slow and we only sold four new airplanes. We’ve been able to shift some employees to restoration work at Centennial and keep them productive that way. But I’ve tried very hard to avoid layoffs because of the highly skilled and specialized nature of the work that takes place here. We do aircraft fabric work and wood work every day, and those skills take time to develop and are hard to replace.”

Many Waco Classic workers got started building remote-controlled model aircraft, and the hangar is dotted with RC airplanes and helicopters they fly during breaks. “A model-builder’s attention to minute detail is critical,” Bowers said. “Our customers appreciate the exceptional skills they’ve developed and the personal touches they add to each airplane.” 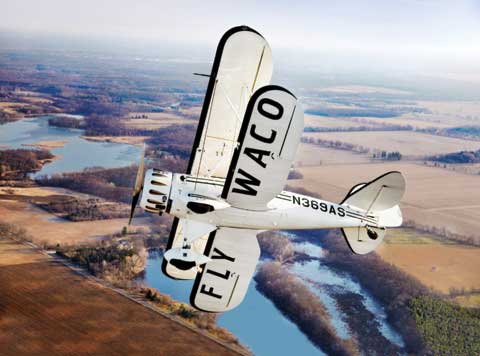 Construction begins with the steel-tube fuselage built in a rolling jig. It’s mated to an engine and wooden wings made in an upstairs wood shop, then covered and painted less than 50 feet away. Surprisingly, most of the biplanes are sold with IFR avionics—and the dual-screen G500 is becoming almost standard.

“Digital avionics have the advantage of not tumbling during aerobatics and unusual attitudes,” Bowers said. “Most of our customers own a ‘serious’ airplane for long-range travel that’s probably equipped with a glass cockpit, and they’re accustomed to the heightened situational awareness that XM weather, traffic, and terrain warnings give them. They want the same safety features in their ‘fun’ airplanes.”

“They took a ride, loved the airplane and the experience, and became customers,” he said. “Ride operators appreciate the fact that—unlike vintage airplanes where replacement parts are hard, maybe impossible to find—we have an inventory right here and can send parts the same day they’re ordered.”

Old-fashioned biplanes and grass strips are made for each other—and I watch from overhead as Wagner guides his red Waco to the putting-green surface at Newman’s Field about seven miles west of Kalamazoo, Michigan. 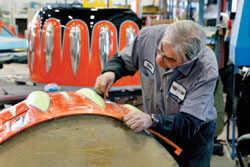 The Waco prelanding checklist is brief: Confirm the steerable tailwheel is in the locked position, apply carburetor heat, spin the oversized elevator trim wheel for a final approach speed of 75 miles an hour, and lay your head back against the headrest and use all of your peripheral vision for lineup. The main landing gear touch at about 60 miles an hour, and I work the stick aft to bring the tailwheel to the dew-covered surface. The runway is spacious and wide, and lined with gorgeous homes and hangars.

The Waco is equipped with heavy-duty Cleveland wheels and hydraulic brakes, and the brakes are almost too good. Cable brakes were the norm for biplanes in the 1930s, but they were notoriously weak and ineffective, barely capable of holding the airplane in place during engine runups. All Waco Classics have modern brakes, but it’s tempting for pilots to become overly reliant on them, or apply them so suddenly and heavily they lock the wheels.

Takeoffs are especially enjoyable on the forgiving grass surface. As the airplane accelerates, I push forward on the stick to raise the tail at about 30 miles an hour and hold a tail-low attitude. The airplane seems to launch itself, and soon it’s climbing at 80 miles an hour and 1,200 feet per minute. This Waco is equipped with a smoke system, and turning it on pumps a prodigious amount of white smoke out the exhaust.

Waco’s YMF series is rated for aerobatics with one passenger, and positive-G maneuvers are delightful—but stick forces are heavy and roll rates are leisurely (about 60 degrees per second). Pilots must reduce the power sharply in dives to keep fixed-pitch props below their rpm limitations, and then add power in climbs. (Wacos equipped with Hamilton-Standard constant-speed props have no such rpm concerns.) Entry speeds of 140 miles an hour are more than sufficient for loops and rolls. The YMF’s V NE is an absurdly high 214 mph—a speed that would require diving for a very long time at a very high power setting to even approach. Power-off stalls are benign, and a gentle buffeting begins about 60 mph with a break at 55 mph. There’s no stall warning horn, but all your senses let you know what’s coming. Wind noise decreases, the engine gets quieter, and if you look at the fabric-covered wings, you can see the material ripple like a sail as the interrupted airflow of the approaching stall moves outboard.

After two glorious hours of flying, it’s time to return the airplanes to their factory home. The white test aircraft will remain with the company and continue its role as an aerial guinea pig. The red aircraft will be delivered to its proud owner.

Inside the hangar, several more airplanes are taking shape—and they are magnificent. The airplanes offer technology that the original Waco designers couldn’t have imagined while continuing the rich legacy of pride and craftsmanship they’d know well.