Get the app Get the app
AOPA Members DO more LEARN more SAVE more - Get MORE out of being a pilot - CLICK HERE
News & Media Wx Watch: Outflow info

Thunderstorms are bad enough, but the surface outflows they generate can actually create more thunderstorms, low-level wind shear, gust fronts, and even tornadoes. The trouble begins, as with any convective situation, with an unstable atmosphere, a source of lift, and air moist enough to provide adequate liquid water content (LWC).

Eagle-eyed “Wx Watch” readers latched on to my “Summer’s Danger Zones” in the May 2010 issue. In the article, I used mean numbers to describe climatological thunderstorm frequencies. I said the mean numbers indicated that half the time more storms could occur, and half the time fewer. The statisticians among us want you to know “it ain’t so!”

Web site of the month

Ever wish you had lightning detection equipment a mouse-click away? Then check out Astrogenic Systems’ StrikeStarUS Web site. You’ll see the lighting count plotted for the entire United States, and can click on links to various sections of the nation. There’s a 60-minute strike count, plus a 24-hour historical count of lightning strokes of all types—cloud-to-ground, intra-cloud, and a total of all types. The strike counts are also plotted on graphs. There’s even a strike-rate-per-minute counter at the lower left of the display. StrikeStar gives you a way of instantly identifying the lightning hot spots, and can serve as a useful tool for documenting case studies. — TAH 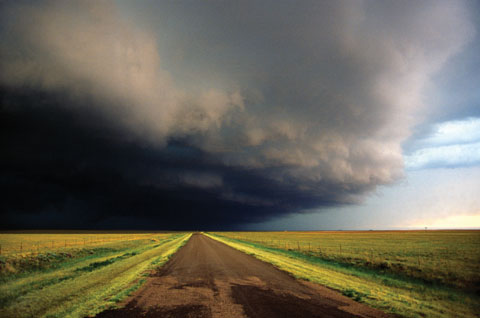 Thunderstorms are bad enough, but the surface outflows they generate can actually create more thunderstorms, low-level wind shear, gust fronts, and even tornadoes. The trouble begins, as with any convective situation, with an unstable atmosphere, a source of lift, and air moist enough to provide adequate liquid water content (LWC). That liquid water—in the form of vapor—is important because when it is lifted and cooled as it rises in a storm’s updrafts, it coalesces into droplets. This change in state—from vapor to droplets—causes a release of latent heat.

The concept of latent heat release can be difficult to grasp. In this case, perhaps it’s easiest to think of the way your skin feels cool when sprayed with water. As the water evaporates—that is, changes from liquid to vapor, the opposite of what happens in a thunderstorm—you can actually feel the resultant heat transfer as a cooling of the skin. With the phase change from vapor to liquid, the tables are turned, and heat is released.

This heat further boosts the already-rising air currents, kicking off a chain-reaction-style process that sends a convective cell to maturity. As the thunderstorm grows and enters the building stage, updrafts predominate. In the mature stage, updrafts and downdrafts characterize the storm’s circulation. And in the final, dissipating stage of our “typical” thunderstorm’s life cycle, downdrafts are the rule. So we’re talking about a lot of downdrafts through the storm’s life cycle. And these downdrafts cause problems of their own.

Imagine aiming a fire hose straight at the ground. As the water flows away from its center of impact, its outer perimeter expands in a circular pattern. Same thing with the outflows from thunderstorms, although in nature a perfectly circular outflow may not always occur. Instead of a circular outflow, there may be bow- or arc-shaped segments.

Outflow boundaries can be identified on radar. Depending on the amount of rain or suspended moisture within them, they can look like curved lines of precipitation. Then again, comparatively dry outflows can also leave signatures on Doppler radar imagery. That’s because the convergence of the outflow with the air ahead of it can lift enough dirt, insects, and particulates to make them visible on Doppler radar.

To an observer on the ground, the passage of a thunderstorm’s outflow boundary is difficult to miss. For example, we’ve all experienced the sudden rise in wind speed that accompanies nearby thunderstorms—as well as the gusty, shifting winds—and noticed the temperature drop. Temperatures fall because surface outflows have their origins high in the atmosphere, so downbursts transport plenty of cold air earthward.

From the cockpit, a shelf, roll, or arc cloud may mark an outflow boundary. (“May,” because dryer outflows obviously don’t contain enough moisture to form clouds.) Let’s just hope you don’t see these sorts of clouds up close, because as you might imagine they can signal dangerous wind shear and downbursts. And they can move at speeds of 50 knots or more.

It’s also worth mentioning that outflows can persist for a day or more, and cover hundreds of miles in the process. Bear this in mind during your preflight weather briefings. Even though thunderstorms may not lie along your route of flight, the outflow boundaries they created yesterday may yet cross your path, catching you unaware. That’s another good reason for checking in with Flight Watch (122.0 MHz) to learn of late-breaking convection. Of course, datalink weather does a top-notch job of bumping up your in-flight weather savvy in thunderstorm season. If you’re lucky enough to have datalink weather—be it on a handheld or a panel-mounted multifunction display—tune in your radar display early and often.

Sometimes, multiple thunderstorms each produce their own outflows. These can collide with each other, creating intense lifting forces of their own—strong enough to produce new thunderstorm cells. Even worse, parent thunderstorm cells can ram into their own, or a neighboring cell’s, outflow boundary. This can set up horizontal rolling motions, which in turn are drawn into the updraft circulations of the main storm cell(s). The horizontal rolling motions become the vertical, rotating columns that we know as tornadoes.

Perhaps the best-known form of outflow boundary are those produced ahead of fast-moving (i.e., at speeds of 30 to 50 knots or greater) cold fronts. These are gust fronts. As with thunderstorm hazards, turbulence, wind shear, downbursts, and microbursts are the main hazards. These topics are fodder for separate discussions.

Meteorologists have built entire careers studying downbursts and microbursts, but suffice it to say that these phenomena are especially dangerous to aircraft in the takeoff and landing phases of flight. That’s when airspeeds are comparatively low, and pilots can be tricked by airspeed fluctuations caused by suddenly increasing, then decreasing gust-induced headwinds.

In worst-case scenarios, an onrushing gust causes a large increase in airspeed. The pilot reduces power in an attempt to maintain a target approach speed, only to pass through the gust and encounter calmer winds—or worse, a tailwind—and watch airspeed quickly bleed off. A stall or huge sink rate can ensue which, at low altitude, can be fatal.

Pilots who hear “gust front” in a briefing are sure to take note, but the fact is that outflow boundaries, on the whole, are given little play in aviation weather warnings. Too bad, because they’re responsible for many of those unanticipated thunderstorms that cause pilots to question forecast accuracy.

To be on the safe side, be on the lookout for outflows any time a convective sigmet is issued, and be prepared to take evasive action quickly. And don’t become complacent because you’re avoiding thunderstorms visually. The general rule of thumb is to keep at least 20 nm away from any thunderstorm buildups. Most of the time, that’s enough of a safety margin. But flying in the clear at even 50 nm away from big buildups may still expose you to the effects of an outflow boundary. One minute you’re OK, the next you’re watching a cell build around you.