Get the app Get the app
AOPA will be closed July 4th, in observance of the Independence Day holiday. We will reopen at 8:30 am ET on Tuesday, July 5.
News & Media Solar-powered airplane lifts off for night flight 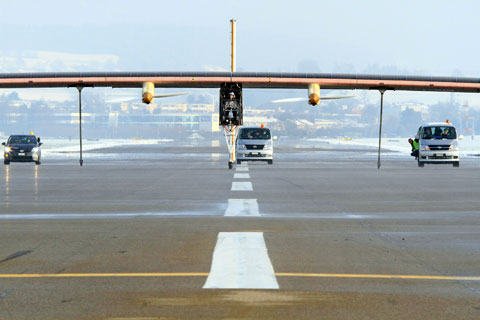 The Solar Impulse lifted off at 12:51 p.m. Eastern time July 7 from Switzerland in an effort to become the first solar-powered aircraft to fly all night on battery power alone.

The aircraft took off from the Payerne airbase with Andé Borscherg, CEO and co-founder of the Solar Impulse project, at the controls.

As this is written the aircraft is starting a climb to nearly 28,000 feet. After sunset the aircraft, designated HB-SIA, will start a slow descent to 5,000 feet by 11 p.m. Swiss time (5 p.m. Eastern Daylight Time). It will continue to fly at that altitude until sunrise when its solar-fed batteries can once again recharge.

The big question is whether the pilot can make efficient use of the battery energy to fly throughout the night. If this mission is successful, it will be the longest and highest flight ever made by a solar plane. Watch the pilot’s progress on the Solar Impulse website.