Get the app Get the app
Already a member? Please login below for an enhanced experience. Not a member? Join today
News & Media Sun-powered airplane flies 26 hours 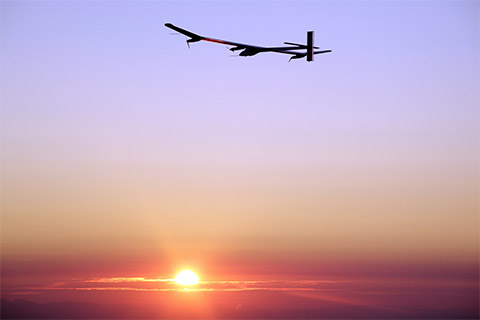 The four-motor aircraft took off from Switzerland, staying close to home for 26 hours and nine minutes before a safe landing. Weather conditions were perfect. The flimsy craft with a 210-foot wingspan flew at an average speed of 23 knots indicated airspeed. It reached an altitude of 28,000 feet on battery power, then glided down to 5,000 feet where it remained on the power from recharged batteries until the sun rose again. Eventually it is hoped the aircraft, designed as a demonstrator of alternative clean energy sources, can use the same technique to span longer distances.

You can see all the details on the Solar Impulse flight, including a new video due out July 8, online.

The Solar Impulse HB-SIA, with André Borschberg at its controls, successfully landed July 8 at 9 a.m. Swiss time to the cheers of a crowd of supporters who came to celebrate the milestone.

Borschberg gave this emotional reaction to the successful completion of the flight. “I've been a pilot for 40 years now, but this flight has been the most incredible one of my flying career. Just sitting there and watching the battery charge level rise and rise thanks to the sun… And then that suspense, not knowing whether we were going to manage to stay up in the air the whole night. And finally the joy of seeing the sun rise and feeling the energy beginning to circulate in the solar panels again!” Borschberg is CEO and co-founder of the Solar Impulse project.

“Bravo André! You have just proved that what I have been dreaming about for the last 11 years, is possible,” said Bertrand Piccard, initiator and president of the project.