Get the app Get the app
Already a member? Please login below for an enhanced experience. Not a member? Join today
News & Media Navy looking at diesel engines for blimps 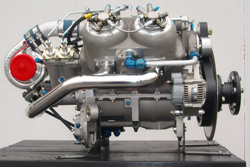 After 80 years, blimps are getting a revival from the military. A U.S. Navy blimp built by the same company that built Snoopy for MetLife is currently spotting oil in the Gulf of Mexico.

When its job there is done, it will be fitted with a DeltaHawk turbo diesel engine for testing. The engine, already mounted in a pod and ready for installation, was built at the factory in Racine, Wis. If successful, the Navy may buy additional engines for blimp surveillance. DeltaHawk will show the actual engine at EAA AirVenture at Oshkosh. Other branches of the military also are looking for blimps that can perform 20-day missions for surveillance.

DeltaHawk engines are could be certified as soon as 2011. They offer the Navy a chance to increase the flying time of the blimp now in the Gulf from 21 hours to 90 hours. The company has flown one of its engines on a Velocity aircraft for a dozen years.