Get the app Get the app
AOPA will be closing at 1:45pm ET on Tuesday, December 6th. We will reopen Wednesday morning at 8:30am ET.
AOPA Members DO more LEARN more SAVE more - Get MORE out of being a pilot - CLICK HERE
News & Media Lear 85 tooling under way 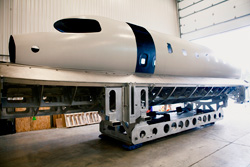 Bombardier Aerospace reports that it has completed the first all-composite manufacturing validation unit (MVU) for the Learjet 85’s fuselage pressure section. The MVU, built at Bombardier’s Montreal factory, is constructed using actual production tooling that will be used to build production Learjet 85s. The MVU will be used to validate the design concepts, manufacturing processes, and quality behind assembly of the airplanes’ pressure vessels.

The 45,000-pound MVU will soon be transferred to the Learjet 85’s assembly facility in Queretaro, Mexico, where a second MVU will be built. Production of the first Learjet 85s is set to begin later this year, according to Bombardier. The first tooling is scheduled for installation at Queretaro later this month. The first of the new, all-composite, 0.82-Mach, 3,000-nm mid-sized Learjet 85s should enter into service in 2013.