Get the app Get the app
AOPA will be closed July 4th, in observance of the Independence Day holiday. We will reopen at 8:30 am ET on Tuesday, July 5.
News & Media Sikorsky Innovations develops electric helicopter 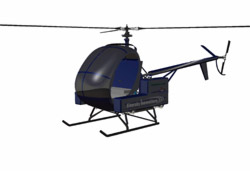 Sikorsky Innovations officials say they are developing an all-electric helicopter technology demonstrator. The Firefly Technology Demonstration Aircraft will appear at EAA AirVenture July 26 in the Aviation Learning Center, along with other state-of-the-art commercially available and prototype electric aircraft.

“Our objectives with Project Firefly are to provide a proof of principle concept to validate the benefits of an electrically powered rotorcraft; to develop the technologies to enable the manned flight of that technology, and to drive future development of improved, state-of-the-art ‘green’ technologies and practices,” said Chris Van Buiten, director of Sikorsky Innovations.

In building the demonstrator, the Innovations team replaced the engine with a high-efficiency electric motor and digital controller from U.S. Hybrid, coupled with a lithium ion energy storage system from Gaia. Eagle Aviation Technologies LLC executed the custom airframe modifications and assembly of the demonstrator aircraft.

“World fuel reserves are continuing to dwindle as demand increases. This inversion of the supply/demand cycle will increase operating costs of all fuel-based vehicles, especially in the aviation industry. Nowhere is this more apparent than in the commercial helicopter market, where the critical role rotorcraft play could be threatened by spiraling fuel costs,” said Mark Miller, vice president of Sikorsky Research and Engineering.

The demonstrator will feature a 200 horsepower electric motor, a motor controller, a battery system, and cockpit controls. First flight is anticipated later this year, upon completion of ground tests and safety of flight reviews.

“With current energy storage technology, payload and endurance will fall short of typical helicopter performance. These values will grow as rapidly maturing technology is integrated on the demonstrator,” Miller added.